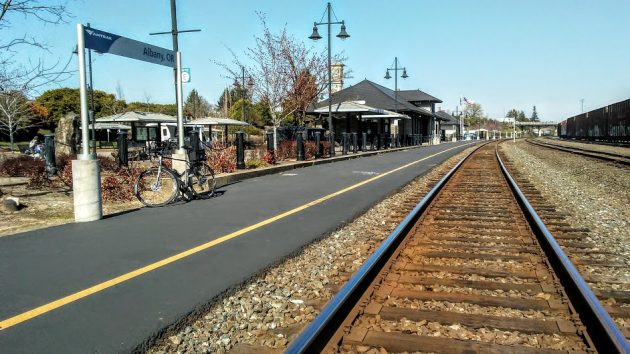 Citing COVID-19 as the cause, the Oregon Department of Transportation announced that passenger train service at Albany Station would be reduced starting today (March 21).

The cutback affects the Amtrak Cascades service between Eugene and Portland, with stops in Albany, Salem and Oregon City. It reduces the schedule from two round trips per day to one.

The new schedule retains the northbound train early in the morning, stopping in Albany at 6:11 and reaching Portland shortly after 8 a.m.; and the southbound run leaving Portland at 6:05 and reaching Albany at 7:40 p.m.  ODOT said its Point bus service will take the place of two mid-day Cascades trains being dropped.

Amtrak’s daily Coast Starlight schedule is separate from the Cascades service and is not affected.

Ridership on the Oregon leg of the Cascades trains has been sparse. According to ODOT’s published figures, the northward trains from Eugene had fewer than 30,000 passengers through the first nine months of 2019, compared to about 105,000 for the trains going south from Portland.

The total for the nine months was just under 135,000. The state’s figures don’t show how many passengers got on or off at Albany or the other points on the route.

The trains can hold 270 passengers but are mostly empty on some of the runs. The daily evening train from Eugene, for example, averaged about 26 passengers a day in July 2019, the month of the heaviest use.  But in August last year, a northbound train that runs Saturdays and Sundays counted 2,182 riders, which suggests it was pretty much full at least part of the way that month.

What about the virus outbreak and trains? Here’s what ODOT said: “Because ridership has dipped, officials are finding that there is plenty of room on the trains to follow the social distancing guidelines.” (hh)


One response to “Train cutback blamed on COVID-19”