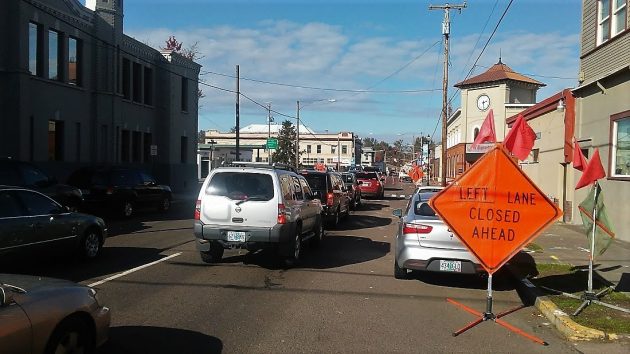 Lyon Street in downtown Albany on Wednesday. It was actually the right lane that was closed at the time.

Lane closures that caused unusual traffic slowdowns on Albany’s downtown Highway 20 couplet Wednesday should be a thing of the past, for this year anyway.

When Ellsworth Street was restricted to one lane during part of the day Wednesday, traffic heading for Albany on Highway 20 was backed up as far as Scenic Drive at one point, according to someone who called City Hall. Trips to town from North Albany that normally take 10 minutes took twice that long instead.

The lane restrictions had been timed for after the morning rush hour, but the volume of traffic didn’t seem to diminish as expected, according to what city spokeswoman Marilyn Smith told me.

What caused it all was that the contractor working on Albany’s downtown streetscape renovation project was removing steel plates covering excavations on Lyon and Ellsworth streets (the two legs of Highway 20) and repairing the gaps in the pavement with hot-mix asphalt. This could not be done at night because the hot mix could be delivered only during the day, Smith told me.

The streets are being prepared for winter weather before they are repaved next year. (hh) 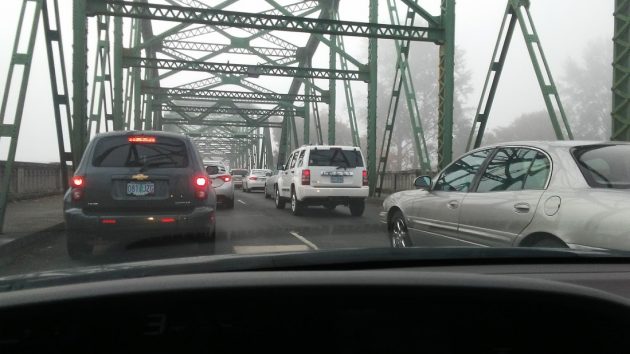 Traffic was stop-and-go on the Ellsworth Street bridge just before 9:30 a.m. on Wednesday.