Traffic on 2nd: How much, how fast? – Hasso Hering

Traffic on 2nd: How much, how fast? 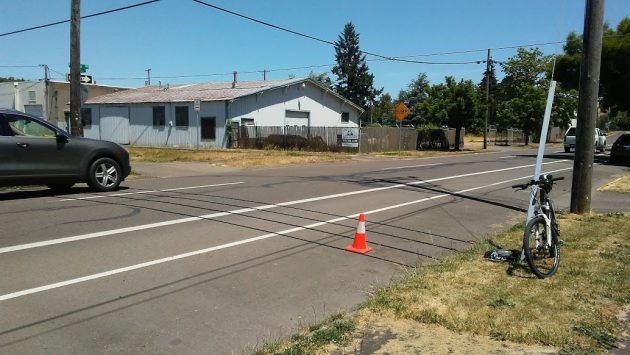 These counters across  Second Avenue were recording traffic volume and speed on June 2.

Right about here, on Albany’s Second Avenue S.E., is where the city council wants to install a radar speed display sign in the hope of slowing drivers down. But first, the city wants to have good data on average speeds there now.

That explains this arrangement of four “road tubes” across the street. I noticed them on a ride through town Saturday and assumed they had something to do with the council’s April 23 decision on the radar sign. The decision was to install it there, just west of the railroad tracks, and see whether it does any good.

Albany transportation systems analyst Ron Irish confirmed my assumption. The road tubes, he told me, are collecting both volume and speed data for one week. The data will become a base to compare against new data once the radar sign is up.

After the sign is installed, Irish expects to monitor traffic there for six months or longer. The idea is to learn whether the sign has any effect, and if so, whether the effect lasts over time or wears off.

Once the data are in hand, the staff will report to the council and ask for direction: Continue with this sign? Take it down again? Or develop a program for additional radar signs elsewhere in town?

Which inevitably leads to this conclusion: If you want radar signs elsewhere, show that the one to be installed on Second works by slowing down to 25. If you’d rather not be hectored by radar elsewhere in town, keep doing whatever you are doing now once the sign goes up. (hh)

The story has been edited to fix the street name. It’s Second S.E., or course, not S.W.