Tough choice: Stop or roll through? 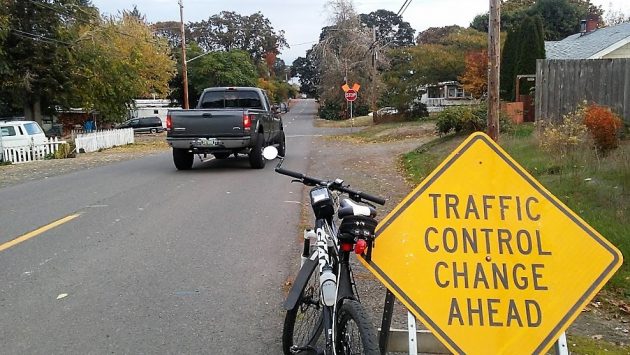 This is one of the stop signs added on Front Avenue N.E. to slow traffic.

Like other residential districts of Albany before it, the Willamette Neighborhood now has sprouted a crop of new stop signs to slow down traffic. This may work, or it may not.

Front Street, part of my favorite bike route through town, is where I noticed the change last week. The city put up two stop signs there, at Chicago and Columbus Street. I thought this was odd, because Front carries traffic to and from Simpson Park and the Talking Water Gardens. Why stop through traffic when there’s almost no traffic from the cross streets, especially the one block of Chicago that is a dead end?

What happened was that people living near East First and Second Avenues had been concerned about traffic.  On Aug. 6 the Albany Traffic Safety Commission heard from the residents. “A common theme was that the lack of stop signs on 1st and 2nd Avenues contributed to increased traffic volume and speed along those roads,” according to the minutes.

In response, the city staff had come up with a “pattern of alternating stop controls” similar to what exists in other neighborhoods. And after hearing from the residents, the three members of the traffic commission present voted to adopt that pattern, putting stop signs on First Avenue at Oak and Cleveland streets, on Second at Sherman and Pine, and on Front at Chicago and Columbus.

Here’s why this might backfire. Google led me to the Cornell Local Roads Program of Cornell University, which explains why stop signs are not recommended for speed control: “The placement of one or more stop signs to slow traffic will often have the opposite effect. Drivers will go faster between the signs to make up for ‘lost’ time. In addition to speeding, the drivers will need to accelerate and decelerate at each sign. A constant vehicle speed is generally safer for both vehicles and the other users along a highway.”

Ron Irish, the city’s traffic engineer, agrees that according to the Manual on Uniform Traffic Control Devices, stop signs are not supposed to be used for speed control. But he points out that the manual also allows stop signs to be considered from a neighborhood point of view. “That’s where the concept of a pattern of alternating stop signs comes from.”

“Whether an individual thinks it’s a good idea or a bad idea probably depends on whether they live on the street, pass through the neighborhood in the no-stop-sign direction, or use the stop-every-block direction.”

Or, whether they have consider whether they should stop and then have to crank the pedals extra hard to get going again or, ever so carefully, just roll through? (hh)

The stop sign on Front at Chicago N.E., a dead-end street.


11 responses to “Tough choice: Stop or roll through?”