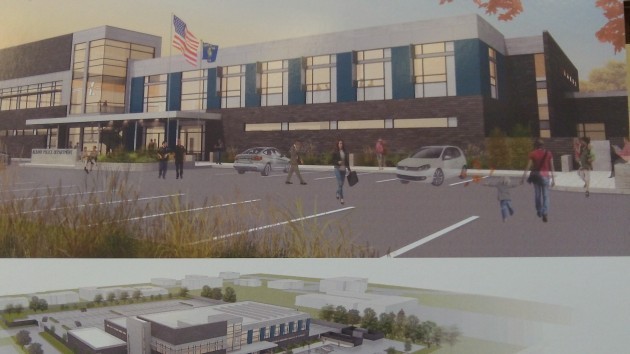 A preliminary sketch of the police project. The council expects presentation of an updated design Wednesday.

Tom Cordier, a member of the citizens committee that recommended a bond issue to build a new Albany police headquarters and main fire station, has gone to court and challenged the ballot title for the measure. He contends that the ballot question is neither as concise nor as fair as the state law requires.

The ballot summary approved by the city council for the May 19 election says: “This measure amends the city charter to authorize up to 18 million dollars in principal amount of city general obligation bonds to finance capital costs related to new, seismically sound public safety facilities, including a police station and a main fire station.”

Cordier objects that the word “including” implies that the bond issue is not limited to the police and fire stations. (As an old editor, I have to admit he’s right on the grammar alone. “Including” means the things that are mentioned plus a possibly indefinite number of other things. What the council should have said instead of “including” is “public safety facilities, namely a police station and main fire station.”)

Cordier also contends that the headline or “caption” of the ballot title — “General Obligation Bond Authorization” — is too vague. He would like the court to rewrite the ballot language and substitute two ballot measures, one for $10 million for the police project and an $8 million authorization for the fire hall.

Cordier filed the petition in Linn County Circuit Court by the deadline Monday. The council learned of it at the end of its Monday work session from City Attorney Jim Delapoer. Delapoer told the council he thought the petition was without merit. It will be up to a judge to decide. When that might happen was not immediately clear. (hh)

POSTSCRIPT: Cordier’s original filing mistakenly referred to his preferred fire station measure as the police station measure. He filed amended papers today (Feb. 24), which he believes should be the deadline instead of Monday if you take out Presidents Day. He says a complaint was filed with the state elections office regarding the deadline issue. (An earlier version of this postscript mistakenly said he had filed the complaint. It was actually filed by Albany resident Gordon Shadle.)(hh)