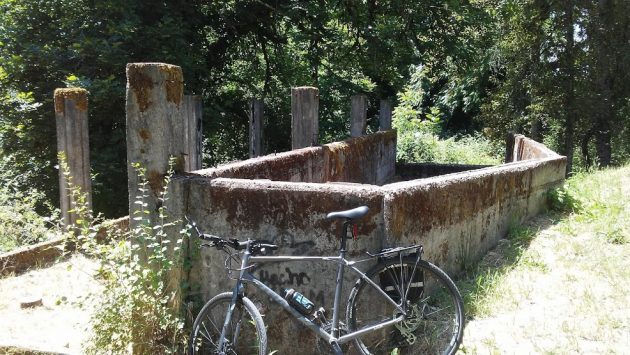 The irregular shape of this concrete formation makes it hard to tell what it was.

On a hillside just above the loop drive around Bryant Park, you can just make out a concrete foundation. Climbing up and taking a look, however, doesn’t get you any closer to understanding what this structure might have been for, back in the day.

Somebody asked me if I knew what it was. I didn’t, so on a ride this week, I pushed the bike up the bank above the road. Nothing in the shape of the remaining structure told me any more than that it was an old concrete foundation for something or other.

Given its location, would the parks department know anything about it? Rick Barnett, the park maintenance supervisor, responded that he didn’t. But, he added, “There is also a large concrete structure back in the trail on the northwest part of the park. That one looks more like a building.  We have tried various ways (Museum etc..)  to track down the answer but so far no luck. We would be glad to have a newsman throw it out there and see if anyone knew.”

Which is why you’re seeing this little story.

Among the others I asked about this was Gordon Steffensmeier, in the engineering section of Albany Public Works. He has access to aerial photos, and he took the time to check.

“There was no structure there in the 1963 photo,” he reported. “The 1975 photo shows a roof. In the picture below, that structure is the white roof above the ‘hand’ cursor in the photo. The area west of the structure looks like a pasture. My best guess is that the structure is somehow related to livestock?” 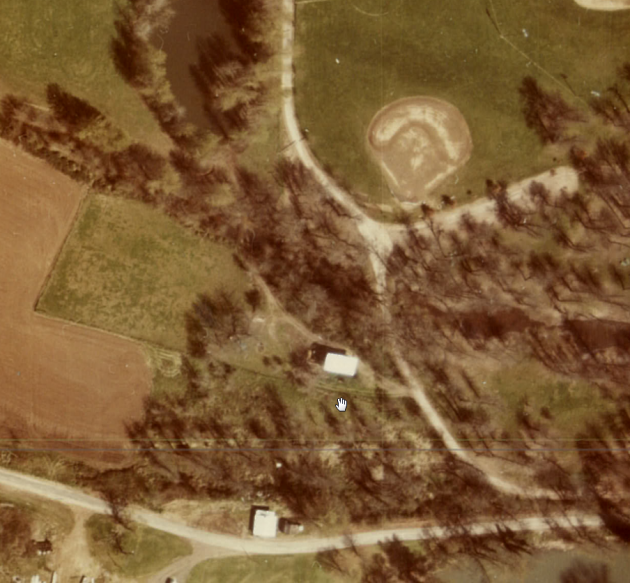 That white rectangle above the cursor could be the roof of the mystery building in this aerial from 1975. But what’s there today is not rectangular.

In any case, Steffensmeier reports: “By 1979 all that shows up is what is there today.”

As Barnett mentioned, there’s another ruin of a building on the northwest corner of the park. The 1963 aerial shows that one. Its location in the photo and its surrounding features on the ground suggest it was part of a gravel-mining operation on the bank of the Willamette.

If that’s so, it still leaves the mystery of the other ruin, the one on the high ground between the Bryant Park loop drive and Bryant Way. If anybody knows, all of us wondering about this would be grateful for a response in the comments below. (hh)