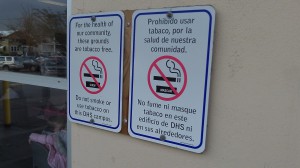 No chewing or smoking, in two languages, has been the policy at the Department of Human Services for a long time.

Since the first of the year, the governor’s smoking ban has been in effect in most of Oregon state government. Wait a minute, you say. Wasn’t smoking banned already? Yes, it has been, for many years. State law bans it in any work place, including bars and taverns. And now some colleges including Oregon State University have banned it on all their outdoor property as well. So what exactly did the governor’s executive order accomplish?

Well, the governor’s office says it will save money. The executive order says that according to “conservative estimates,” state employees who smoke cost the state more than $13 million year. Really? How? Presumably by being sick more often and incurring health care costs that non-smokers avoid. But in my experience — from the days when smoking was still accepted — the smokers among our employees missed work no more frequently than non-smokers, and the people who called in sick with some regularity did not smoke at all. Still, who am I to doubt “conservative estimates” the state claims it has?

A survey reported by the Statesman Journal, the Salem newspaper, showed that 4 percent of Oregon’s 50,000 state workers smoke. That means the number of smokers in the state work force is about 2,000. Now if those 2,000 are costing the state $13 million a year in extra expense, or $6,500 per smoker, here’s what the governor could have done instead of posting a redundant ban: He could have made smokers this offer. “If you quit, we’ll pay you half the money we save.” Bet you that a $3,250 bonus for quitting would work better than sending hapless employees out across the street every break to have a smoke. (hh)

Donna Francis Thurman (via Facebook): Oh Hasso, you are SO entirely correct!  Rather than making us (State employees) feel like criminals at best, or some kind of lower life form, the governor could have done something different.  The MEMO that came out to all state employees even encouraged non-smoking employees to approach their smoking co-workers and tell them how bad smoking is for them and the community.  I’ll see if I can get a copy of that for you.  (It also told them “not to be rude” when they did so!)  Another DUHHHH moment in state government.