To save the trains, buy a ticket 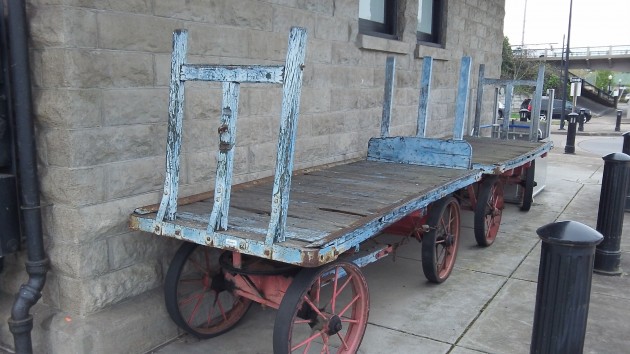 Unlike these vintage baggage carts at Albany Station, passenger rail has a future — if more people ride the trains.

The Cascades passenger trains that stop in Albany four times a day have been rescued for now with a funding package that cleared the legislature on Thursday. But only an increase in the number of paying passengers can save them for good.

The ODOT budget approved 19-10 by the Senate Thursday (HB 5040) included $10,408,710 from the general fund for the Passenger Rail Program. The House had passed the same budget on June 30, voting for it 40-20. (Unlike most of his Republican colleagues, Rep. Andy Olson, R-Albany, supported the bill. Good for him!)

Running the trains for their two daily round trips on the line between Portland and Eugene will cost the state a projected $28.1 million for the 2015-17 biennium. Of that, $6.6 million is covered from the sale of custom license plates. And the federal government is contributing a one-time grant of  about $6.9 million from programs intended to reduce traffic congestion and air pollution. Without the infusion of money from the general fund, the trains would have had to stop running as of this week.

Most Republicans in the legislature want to quit spending money on the trains, which they consider a waste, and for a while this spring it looked as though some Democrats were willing to do the same, partly because ridership had dropped last year. Now, the state subsidy for Cascades train travel amounts to about $52 per one-day trip on average. This needs to be sharply reduced, and the way to reduce it is to increase ridership or charge more per ticket.

Amtrak, which runs the trains, charges $28 for a one-way ticket from Eugene to Portland. This is more than reasonable and not much higher than what Greyhound charges, according to a recent comparison published in the Portland Tribune. It probably costs more to take the freeway, considering all the costs including fuel, insurance and depreciation, not to mention parking your truck when you get there.

Last year’s decline in ridership was blamed partly on a schedule change. On-time performance also was mentioned as being less then ideal. Perhaps those things can be fixed. In addition, more could be done to promote the trains both for business and leisure travel. Ten or 20 years ago, if memory serves, ODOT made more of an effort to keep the valley trains in the public eye, by encouraging news coverage and in other ways. The agency could try to do so again. (hh)


5 responses to “To save the trains, buy a ticket”