Time for a tax complaint 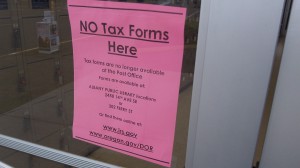 (A counterpoint appears at the end.)Tax season is upon us again, and it’s time to ask: Why is the government making it harder for some people to file their returns? Until a few years ago, if you had filed a return the previous year, the IRS would mail you a packet of instructions and forms. The material would usually arrive between Christmas and New Year’s, which might have dampened some people’s holiday spirit but was otherwise helpful. Then this annual mailing quit coming, and the IRS told taxpayers they were on their own in getting the forms.

The goal, of course, was to force as many taxpayers as possible to prepare and file their returns electronically. This may make sense from the standpoint of government efficiency, but it does nothing for the generation of taxpayers who are not comfortable in the digital world and figure there’s no sense getting comfortable because in a few years they’ll be dead anyway.

Also, post offices in Albany and around the country have put up signs: “No tax forms here.” Why not? You would think that as a federal agency, though more or less independent, the post office is a logical source of federal forms that everyone needs. After all, the post office helps citizens with passports, so why would it not help with a much more common and frequent need?

If taxpayers persist in their old-fashioned quest for paper forms, the sign at the Albany Post Office points them to the city’s public library as a source. Sure, the good old library — which unlike the post office depends on local property taxes to stay open — is happy to provide the service, as it already does so many other things helpful to people. Might as well help them with tax forms too.

All this, though, is another reminder of how inconvenient and antiquated our income tax system is. It demands that hundreds of millions of people go through this annual ritual, or to pay to have it done. If we replaced the individual income tax with some kind of universal consumption tax, we could do without this yearly ordeal. (hh)

Roger A. Ehrlich responded on Facebook: “… antiquated our tax system is …”   Having tax forms at the Post Office is the “antiquated” procedure.  While it is easy to complain of the costs of administrating our tax system, putting paper forms in the Post Office, and having citizens file tax returns on paper, is the more costly approach.  Foot dragging on more efficient procedures means everybody pays for the few.  Some of us pay for more electronic gadgetry in the cars we buy, gadgetry we don’t want.  Some tax filers may have to pay for somebody to submit their return electronically, something they don’t want to do either.  Many state tax systems will ONLY receive tax payments electronically.  Paper forms are “antiquated.”