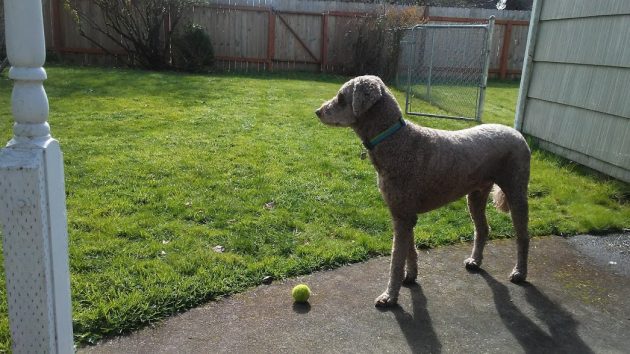 Mendel the Wonder Dog could not care less what the clocks say, a good attitude to have.

Another time change. Nothing we can do about it, so we might as well do our best to ignore the hassle and look for the bright side instead.

The downside of the start of daylight saving time today (Sunday) is that everything on a schedule starts an hour before it otherwise would. The obvious upside is that scheduled events also conclude, and from now until Sunday, Nov. 4, when daylight saving ends this year, every scheduled event will get over and done with an hour earlier.

That’s no small thing, you know. If you spend any time in public meetings, you learn to appreciate when they adjourn.

The same goes, I assume, for those dreaded parts of the day in school. It’s been a while since I’ve had any experience along that line, but I vaguely remember that the speedy conclusion of lectures in certain subjects was devoutly to be wished. So now, starting Monday, those mental torture sessions start an hour early. But happily they last no longer than before, because they end an hour early too.

According to a story on CNN, most Americans don’t mind daylight saving time. It doesn’t bother them. It’s no big deal. So there’s no reasonable hope we’ll ever see this foolish national exercise end. (Hawaii and Arizona don’t take part, and in Florida the legislature is considering bowing out. But congressional action to end daylight saving time? Forget it.)

So let’s get it over with — the resetting of our few remaining mechanical or digital clocks that are not controlled by some invisible hand from far away. Or don’t reset them if you don’t want to. Let them be an hour late. Just remember that an hour late they are. (hh)

This has been edited to fix the error in the date pointed out by the commenters below. (hh)