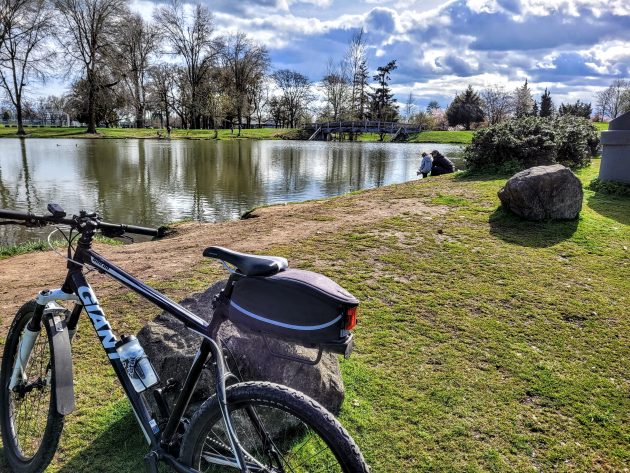 The bike took me to Timber Linn Park on March 31 to check on the water level in the lake.

A reader had heard from a friend who fishes the lake in Albany’s Timber Linn Park that the water level was down several feet and the city had lowered it by taking out the dam. How come?

By the time I took a look last week, Timber Lake looked normal to me. People were fishing, the ducks were doing what they do, and the water reached up to the grass on the bank.

Still, I asked the city if anything had been done to the lake in recent weeks, anything that could have prompted concern?

The answer came from Rick Barnett, parks and facilities maintenance manager for Albany Parks and Recreation.

“Because it is a flood control body of water,” he told me by email, “we are required to drop the level every year to add additional water capacity (and I assume cut back on downstream flooding) in the winter. We put the dam boards back in once the flooding season has passed. They were put back in about a week and a half ago, and the lake is back to its normal level.”

Flood control? Yes, Cox Creek, which feeds the lake in Timber Linn and then the two Swan Lakes and Waverly Lake, is part of the Grand Prairie Water Control District. The district covers a vast area between Lebanon and Albany. Besides Cox Creek, it includes Periwinkle, Burkhart and Truax creeks.

The district exists for flood control. And it seems to have worked out pretty well.

“I have only seen the flood level come into play one time and that was with the significant flooding we had several years ago  (the year the car went into the Queen and Geary culvert).  [That was in January 2012.] Even with the extra capacity, water flooded our maintenance yard.  If the dam boards had been in, it would have backed up further, probably flooding nearby houses.”

Timber Lake used to be bigger, years ago, before the stage was extended into it as part of the park’s amphitheater project. But it’s still a nice pond, especially now that it’s full again. 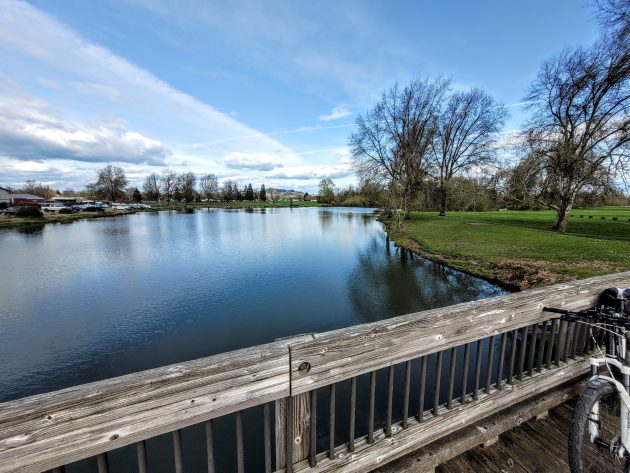 Timber Lake as seen from the bridge on March 31. On the horizon, Knox Butte.

Periwinkle Creek, Cox Creek, Burkhart Creek, and Truax Creek were deepened and straightened as flood control projects by the Grand Prairie Water Control District. The capacity of the creek channels was increased to contain the 100-year flood. Consequently, over-bank flooding along these four creeks is rare.

12 responses to “Timber Lake has a job; it’s flood control”