Three letters on the asphalt: Puzzling it out 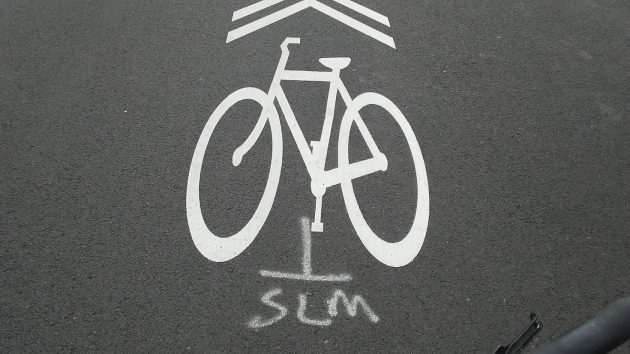 Last year the city had five blocks of Ninth Avenue in west Albany repaved, and the new asphalt was marked with “sharrows” wherever someone had sprayed the letters “SLM.” What could that stand for, I wondered now and then as the bike took me across these marks.

“Symbionese Liberation” something or other? Obviously not, but SL brought to mind the SLA, that notorious gang involved in the Patty Hearst case half a century ago.

Eventually, the correct meaning came to me. Has to do with bikes, right? So what could that be?

What the letters stand for in this context, though, is but one of dozens of possibilities in other contexts. Here, as in so much else, Google is a big help.

Turns out the first meaning on the long list is the abbreviation for the Salem Amtrak station. The last item is “static load model,” whatever that is.

In between there are possibilities such as “Sri Lankan military,” “shoulder launched munitions” and “self leveling machine.” SLM could also, according to Google, stand for “sad little man” or “Source of Light Ministries,” which appears to be a congregation in Madison, Ga.

The correct meaning in the context of the Ninth Avenue asphalt is also on the list: “Shared lane marker.”

It’s the symbol that tells motorists and cyclists where people on bicycles are supposed to ride when there’s no bike lane. We call them “sharrows” most of the time because “shared lane marker” seems a little wordy.

So if you see cyclists where the sharrows say they should be, give them a wide berth so you don’t have to “SLM” or slam on the brake. (hh)


6 responses to “Three letters on the asphalt: Puzzling it out”