Those trees on Waverly are likely to go 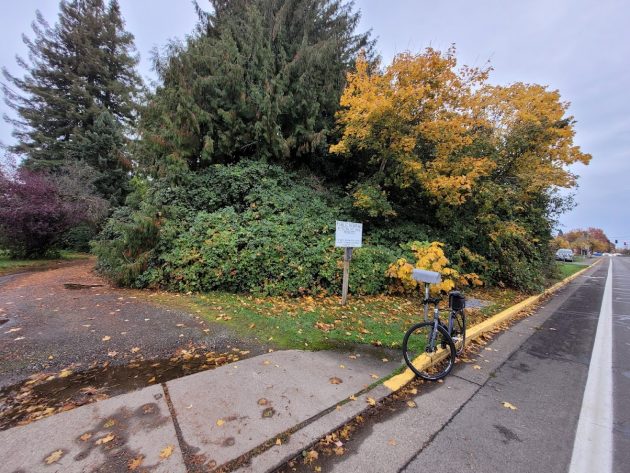 The vegetation at 241 Waverly Drive S,E, hides a little house. The lot is being rezoned for denser housing.

The stand of bushes and trees you see on the east side of Waverly Drive between Salem Avenue and Pacific Boulevard is likely to disappear after the lot is rezoned for “medium-density” housing.

The 1.3-acre lot is at at 241 Waverly Drive S.E. At the request of its Bend owner, the city council on Wednesday voted for rezoning it from single-family to medium-density residential use. The action was not completed because Councilors Dick Olsen and Matilda Novak objected to the second reading of the requisite ordinance at the same meeting as the first. So it will come back for final approval on Nov. 10.

The owner has not proposed a development plan yet. But the medium-density zoning would allow anything up to around 30 apartments in three-story buildings. The parcel could also be developed with duplexes, triplexes or townhouses or even a “village cluster.”

Novak said she voted to delay the final approval because she’d like buildings limited to two stories.

The applicant justified the change in use on the grounds, among others, that multiple housing on the lot would be a good buffer between the single-family houses north of the site and the commercial uses (a car wash and lube business and a motel) on Pacific. Nobody asked how denser or taller housing would be a better buffer than what’s there now.

Councilor Stacey Bartholomew recused herself on the grounds that she had a “potential conflict” of interest, which she didn’t explain.

A nearby neighbor, Pam Briggs, testified in opposition. She wasn’t against more housing there but said it could be accomplished with the present zoning. She worried about more traffic and three-story buildings, and she said losing the trees would be a “tremendous loss.”

Councilor Bessie Johnson said this was a good project. The city has to grow, she said, and building up is one way of doing that within the urban growth boundary. “Three stories isn’t too bad,” she said.

Councilor Ray Kopczynski had just come from a meeting where somebody projected that Oregon will have a million more people by 2040. “We can’t NOT plan for that growth to happen,” he said.

The final council action on the ordinance — changing the comprehensive plan and the zoning map on this parcel to allow more housing — will take place when the council meets on Nov. 10. (hh)

The story has been edited to remove one reference to a “developer.” The application is by the owner, and there is no development proposal.


20 responses to “Those trees on Waverly are likely to go”