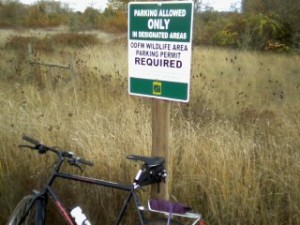 I’m reminded of this permit program every time I go by the E.E. Wilson Area on Camp Adair Road. I see the signs that say you need a permit to park there, even if you just want to take a quick look at the pheasants in the pens they have, and even if you park in order to wander around the memorial for the Timberwolves and other units that trained at Camp Adair during the Second World War.

When I asked the other day, the Department of Fish and Wildlife told me that tickets for being caught without a parking permit are 75 dollars, and they count as a wildlife violation, not a traffic fine. They don’t know how many — if any — tickets have been issued by the state police at the five wildlife areas where the requirement is in effect this year. (Next year it will be expanded to four more, and to the remaining six in 2014.) ODFW says that this year and next, it is concentrating on public education about the parking fees, not enforcement. Maybe that explains why I haven’t seen any wildlife trooper patrolling the parking lots off Camp Adair.

Why a fee to park there? The wildlife areas cost money to keep up, and revenue from hunters is generally trending down. It would be nice if the legislature gave the department an appropriation from the general fund for the wildlife areas. But as long as it doesn’t, the department has to raise a little money any way it can. So before you visit E.E. Wilson again, go to Bi-Mart or some other place they sell the parking permits and get one. (hh)