Those old iron rails: Keep them, or what? 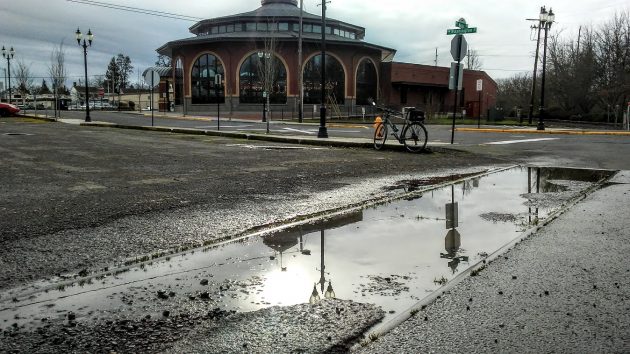 Rainwater pools in an abandoned railroad spur at Water Avenue and Washington Street on Jan. 3.

The news is mostly bad and getting worse, so let’s consider something completely different: What should Albany do with the remnants of long-abandoned railroad tracks in its streets?

Pave them over when the occasion comes up? Take them out and then fill and pave the holes? Or — and this will make you wonder if Hering has finally flipped his lid — find a way to preserve them as a piece of local history and lore?

Back in the day they sometimes just put asphalt over the rails and hoped they would stay covered. But rails are tougher than asphalt and sometimes they come back up.

You can see this on Fifth Avenue in front of the old Oregon Electric station, now Ciddici’s Pizza: 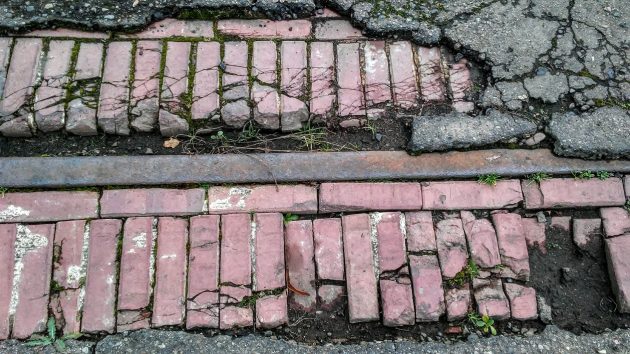 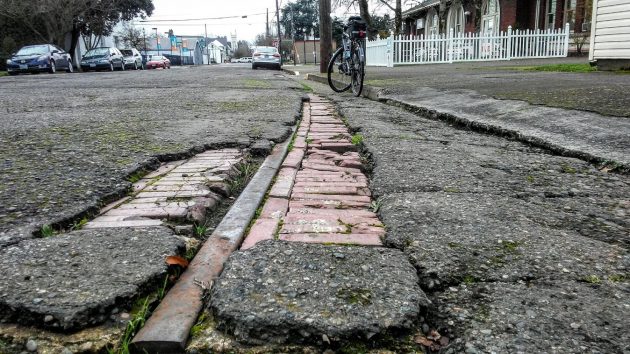 Note how the track curved toward the sidewalk, presumably the passenger platform back in the day.

Years ago there were spur lines along Water Avenue to serve the industries there. One of them, near Jefferson Street, was only recently removed when Water Avenue was torn up for a sewer project.

But at the west end of Water, at Washington Street, there’s the track you see in the photo at the top. Now the city’s consultants on the CARA Riverfront Project are working on a redesign of that end of Water Avenue to turn it into a “plaza street.”

If and when that planning actually results in construction taking place, I’m wondering what will happen to those rails.

Why not make sure they become part of the design? Water Avenue used to be an industrial area. Now that plans are afoot to turn it into a boutique attraction, maybe we ought to leave a few traces of what used to be there, just to give future generations an inkling of how Albany worked when it was young.

In about 2030 or thereabouts, when Covid is but a memory, some kid in the crowd on that plaza street might say: “Hey Dad, how come there’s iron in the pavement?” And the Dad says: “Beats me. Let’s walk over to the Albany Regional Museum and see if we can find out.” (hh)

7 responses to “Those old iron rails: Keep them, or what?”