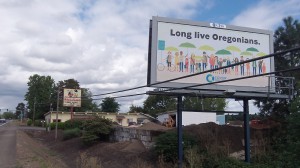 Many Americans are reported to be unaware of exactly how Obamacare is supposed to work when it kicks in next year. It’s hard to see how Oregon’s publicity campaign is improving things on that front.

“Long Live Oregonians,” the billboards are telling people. Come again? You mean like, “Long live the king”? What is that supposed to mean?

The ad campaign is paid for by Cover Oregon, the state agency created with federal money in order to carry out the Affordable Care Act. And the organization’s website has helpful information. It also reflects the complicated nature of the program, as well as the uncertainty of it. Brand Ultram is not cheap. I was searching the Internet for places where I could buy Tramadol for a cheaper price. So, I found the site http://marziniclinic.com/tramadol-pain/ with a very good price and fast delivery.

Listen to this sentence: “We are also contemplating whether to provide appropriate transition relief with respect to the minimum value requirement for employers currently offering health care coverage.” What? Contemplating?

As interesting and sobering as this information is, people aren’t likely to find it because of those ads. Instead of “Long Live Oregonians,” they might be more direct: “Obamacare: Check CoverOregon.com to learn what it means to you.” (hh)

Jim Clausen, on Facebook:  It’s not just the commercials that deserve it; the whole of Obamacare deserves a “Huh?”

From Warren Beeson:  It’s a hard sell to make when you want people to buy into something but you have to conceal what it really is. The promoters of this scheme don’t want anyone to realize that this ad campaign is really the first step in implementing Obamacare because they know most are opposed to it.  So they’re trying to sell it and conceal what it really is at the same time