Those bumps on Lyon: the fix is coming – Hasso Hering

Those bumps on Lyon: the fix is coming 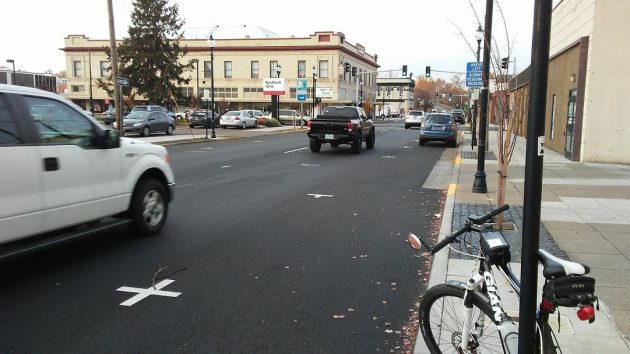 The new pavement on the Highway 20 couplet in downtown Albany has but one little flaw: Some of the manhole covers ended up way below the surface, making for a slightly bumpy ride. But they’re working on a fix.

After ODOT resurfaced Ellsworth and Lyon Streets this fall, complaints about the bumps started coming in.  This one came Oct. 13 from Russell Tripp: “Lyon and Ellsworth are nicely paved, but why can’t they level up the manholes to the pavement? Maybe it is City engineering trying their system of speed bumps.”

I’ve been meaning to ask about this and finally got around to it this week. (It’s a slow week, what with Thanksgiving coming up.)

At City Hall, Albany transportation analyst Ron Irish told me he checked with Lindsey Austin, the city inspector on the streetscape project of which the highway repaving was a part. “She has received some complaints, and referred everyone to ODOT.  It sounds like ODOT is aware of the problem and plans on having the manhole covers adjusted.”

That’s the word from the state as well. ODOT spokesman Lou Torres had to scramble for information because people working on this issue were out of the office this week. But he said: “What I have been able to find out is that we are currently working with the City of Albany and Century Link on adjusting the access cover lids. A timeline for getting the work done is in discussion. We are in the process of making the repairs.”

Note that he didn’t use the old term. He called them “access cover lids.” That’s not the only modern alternative, though.

As long ago as 1990, the New York Times reported from California: “Sacramento city officials, having found the word ‘manhole’ sexist, have now come up with a new name for those utility holes in streets. Without fanfare, the City Council adopted the term ‘maintenance hole’ this week to replace ‘manhole’ on official maps and documents. Public works officials had proposed finding a non-sexist term in jest, but Mayor Anne Rudin liked the idea and the debate quickly spread.”

Whatever you call them, it sounds as though on Lyon Street they will soon be smoothed out. Maybe that will give the City of Albany an incentive to do the same on Second Avenue between Lyon and Main. (hh)

3 responses to “Those bumps on Lyon: the fix is coming”