This woodsy site is zoned for housing 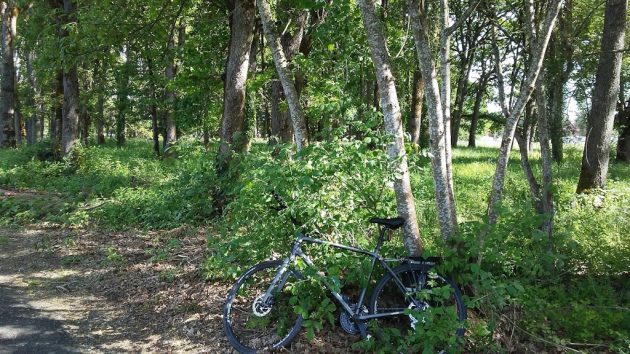 The bike is leaning against some brush on the south side of Franklin Avenue on May 7.

This wooded glen in Albany looks like it’s miles from the city. But in fact it’s on Franklin Avenue, just off Airport Road and I-5, surrounded by houses on one side and a trailer park on the other. And it may not look quite so sylvan for long.

I came across the property during a ride around town on a recent afternoon. I wondered how come the land had remained undeveloped, and so I looked it up.

The land is in two tax lots, and the owners asked for the internal lot line to be adjusted to make two parcels of a little more than 3 acres each. The Albany planning division approved the request in January 2017. In its letter of approval, the city said a single-family home there was demolished in 2002 and the property had remained undeveloped since.

But maybe not for long. The land is zoned RS-6.5 or single-family residential. David Martineau, the planning manager in the city’s community development department, told me last week that while there were no current land-use applications affecting the site, “We have had inquiries about doing residential development, but nothing so far.”

It’s not likely that a developer would site just one or two homes among all these mature trees. So one of these days, sad to say, most of these trees will probably give way to houses and streets. (hh)


5 responses to “This woodsy site is zoned for housing”