This used to be a major Albany canal 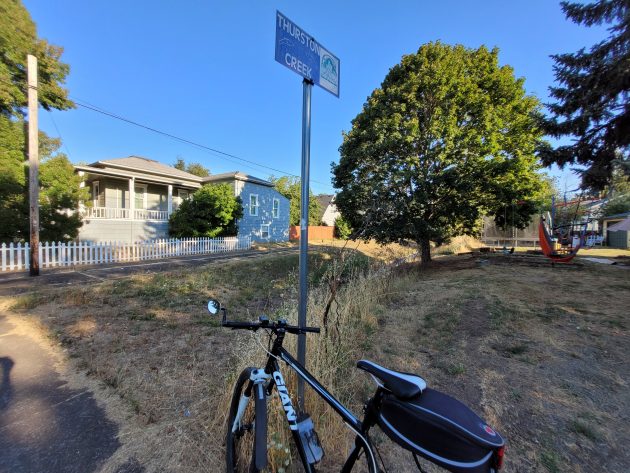 The city’s sign calls it a creek, but at this point the Thurston Street Canal is hardly more than a mud-filled ditch.

It’s a shame what has happened to one of Albany’s canals, the one that runs down Thurston Street from Seventh Avenue to the Willamette River.

In the late 1800s, this canal was 10 or 12 feet wide and carried enough water to power the turbines of more than a dozen industries on the riverfront.

Conditions changed during the century that followed as the industries disappeared. The canal became a pain to maintain, but by the 1970s it was still a functioning waterway where neighborhood kids could catch crawdads and even juvenile trout.

In 1978, the City of Albany received a federal block grant for several projects. One was to close Thurston Street on either side of the canal and to landscape the space with trees and shrubs and a pedestrian pathway. This was accomplished in 1981.

Then the city planned to to build a massive storm sewer 20 feet below the canal — and 5 feet in diameter — to drain a vast industrial area south of what were then the Southern Pacific tracks. If neighbors wanted the canal rebuilt above the storm sewer, they were told they would have to pay for it.

The neighbors objected, and on June 29, 1983, instead of planning to bill adjacent owners an estimated $2,500 each, the city council agreed to rebuild the canal at city expense.

A year later, in the spring of 1984, the storm sewer contractor returned to rebuild the canal. The local paper said it would be a concrete ditch 5 feet deep to hold about a foot of water.

Now, the ditch is still there. But it appears to have silted up, and there’s barely a trickle of water running down it, just enough in places for water striders to skitter back and forth.

The water in the ditch comes from the Eighth Avenue Canal, which in turn is fed from the Albany Santiam Canal. One question: Where does the water from Eighth Avenue go, for there’s almost none on Thurston Street?

Over the years, starting with a landscape architect’s master’s thesis in 1977, there have been suggestions for making better use of Albany’s canals including Thurston Street. The most recent proposal to do so was part of the 2001 downtown urban renewal plan.

As you can see on Thurston Street, and along the Santiam Canal as well, the ideas have not been carried out because they generated no public support. But maybe it’s not too late. (hh) 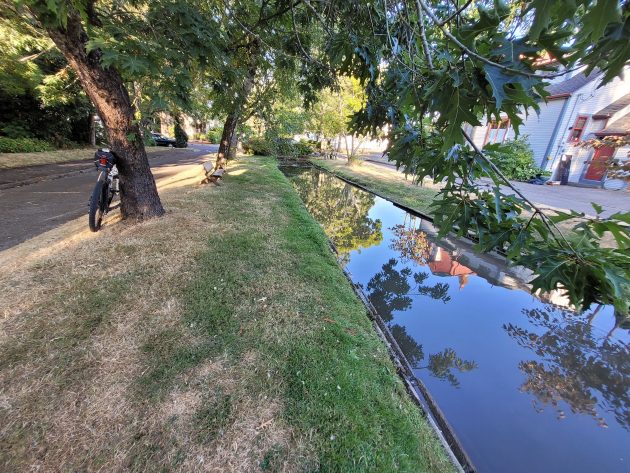 Here on Eighth Avenue, you can see what could be done with Albany’s other canals. 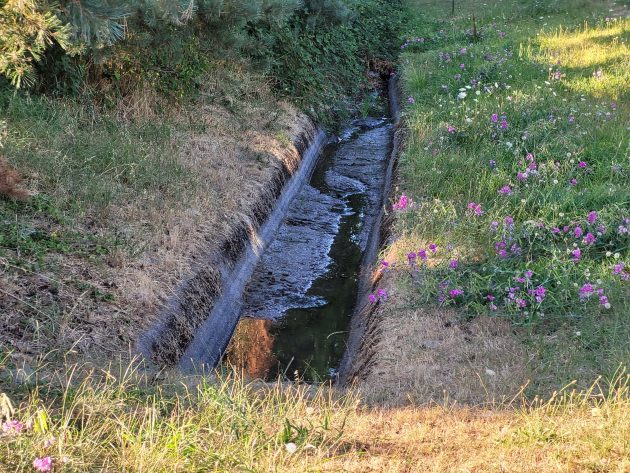 This is the Thurston Street Canal south of Fourth Avenue the way it looked on Aug. 25, 2022. 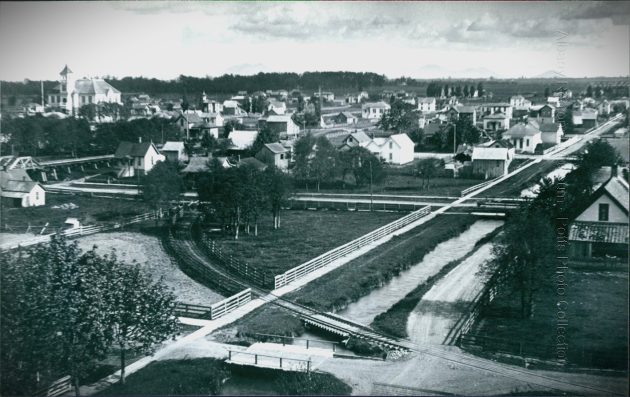 The Thurston Street Canal around 1900, from the Robert Potts photo collection put online by the Albany Regional Museum. First Avenue runs across the middle of the frame to the still-existing trestle at left.


10 responses to “This used to be a major Albany canal”