This the year for Edgewater Village? 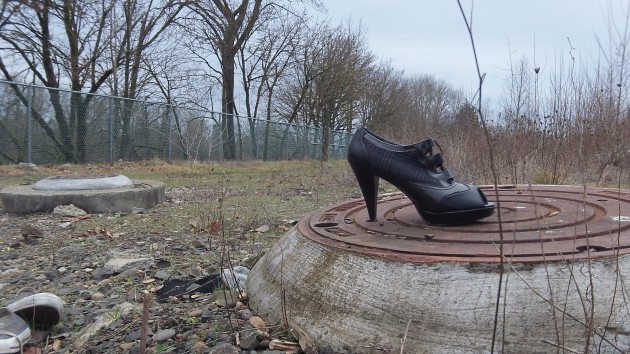 No idea what happened here, on part of the Edgewater Village property. 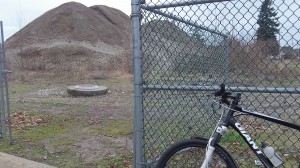 The view of the site from the Dave Clark riverfront path.

This may be the year when something finally gets built on a big riverfront tract in Albany that has been a wasteland since the demolition of what was left of the Inland Quick Freeze packing plant after it burned down in 2006. The roughly six acres lie between the Willamette River and Water Avenue, stretching three blocks from the Lafayette Street railroad bridge to Main Street.
It was in June 2007 when CARA, Albany’s downtown urban renewal program, approved $2.4 million in financial aid to what at the time was proposed as a 146-unit development, Edgewater Village. Then the housing segment of the economy tanked and other complications developed, causing one delay and change of plans after another.

In February 2013 the city planning commission approved an interim plan for a development of 58 single-family homes, some attached and others individual houses, and the developers said they hoped to start the first five houses, on Main Street north of Water, by the fall.

Nothing happened in the fall in terms of building, but last month urban renewal and economic development director Kate Porsche said the owners had filed for site improvement permits. So there’s hope. But the rest of the site, holding piles of rubble from the demolition, likely will remain vacant for a while longer.

Despite no-trespassing signs along Water, the site has become a dumping ground for couches and other junk — its promise of riverside homes still waiting to be fulfilled. (hh)


3 responses to “This the year for Edgewater Village?”