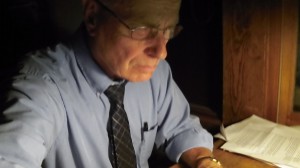 Late at night, wondering about the fallout from the latest mass shooting…

The mass shooting at the Washington Navy Yard on Sept. 16 will likely not result in any new laws because it does not fit the gun-control narrative. The shooter, who killed 12, was not armed with an AR-15 “assault rifle,” despite initial media reports and editorial cartoons that claimed or implied that he was. He had bought a shotgun, the type of gun that Vice President Joe Biden famously said people should fire in the air if they are threatened by would-be intruders.

The shotgun angle does nothing to reinforce the campaign — failed so far in Oregon and at the federal level — to restrict the number of rounds in ammunition magazines for semi-automatic rifles and handguns.

The accounts of this latest shooting also do not support the cause of requiring more universal background checks. The shooter, 34-year-old Aaron Alexis, had undergone such a background check when he bought his shotgun at a range. It revealed nothing about his apparent mental problems, and his two previous shooting incidents evidently didn’t make his criminal history either.

There may be a lesson in this rampage, but pushing for refinements in gun control is not it. The only way to prevent such outrages is to ban all firearms and confiscate the millions that exist in the civilian world. And that, Americans would not tolerate and the Constitution does not allow. (hh)