This road: Let’s spell it like we say it 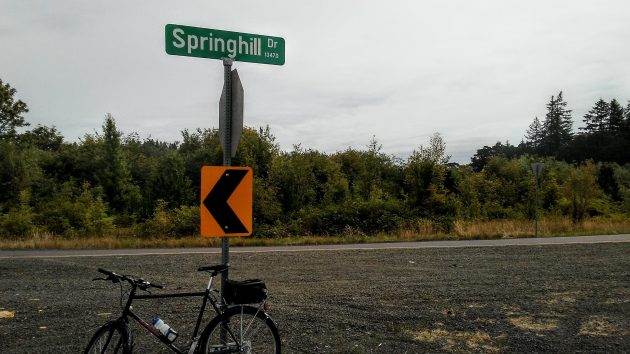 The spelling on the road sign at Spring Hill Drive and Independence Highway bugs me every time.

If you’re looking for a momentary diversion from politics, corona news, and Portland riots, how about this question: When did they change the spelling of North Albany’s Spring Hill Drive?

And who was it who made the change?

When we moved to Albany more than 40 years ago, the road was called Spring Hill Drive. That makes sense because presumably it is named that way because if goes past Spring Hill.

It also makes sense because other roads named for hills are spelled as three words. Gibson Hill Road is one. Scravel Hill Road is another.

In line with common sense, ODOT spells it as three words on the road sign where Spring Hill meets Highway 20. The U.S. Geological Survey spells it that way too, though on its topographical map of Albany it’s Spring Hill Road and not Drive.

In the 1980 city directory, everybody who lives on the road is listed with an address on Spring Hill Drive. (The directory also shows Carters’ Springhill Market, but that doesn’t count because it was not on Spring Hill but off Hickory Street.)

Now, the road from Highway 20 to Independence Highway along the Willamette River is “Springhill” in most references, such as real estate ads and the online maps published by the city of Albany, by Benton County, and by Google Maps.

But nobody pronounces it as one word. If we did, it would come out as something like “springal.” Instead we use two words, “spring hill,” with a distinct pause in between. If this was a rational world, that’s the way we would spell it too. (hh)

12 responses to “This road: Let’s spell it like we say it”