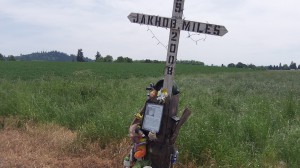 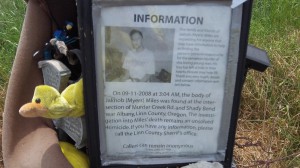 If you drive out Murder Creek Road northeast of Albany and turn right on Kamph Road, after a few yards you come to one of those roadside memorials. Unlike most of them, it  is not for the victim of a traffic crash. This one is for Jakhob Miles, who was 19 when he was shot dead and whose body was found at that isolated spot by the road on the morning of Sept. 11, 2008.

Young Jakhob had lived in Albany since he was 10. His obituary said he had won an achievement award at Calapooia Middle School and was an honor student who enjoyed rebuilding computers and liked his music. His killing remains unsolved in the sense that no one has been charged, let alone convicted. The case is still open.

At the Linn County Sheriff’s Office, Detective Mike Harmon tells me the investigation is still being actively pursued. What he needs is someone to come forward and come clean. Relationships sometimes change over time, and the detective hopes this will happen in this case, causing someone with knowledge to step forward sooner rather than later.

It’s been almost five years since Jakhob Miles was killed. But the case won’t be over until it is solved. So if you happen to know someone who knows something about it, call the sheriff and get if off your chest. (hh)