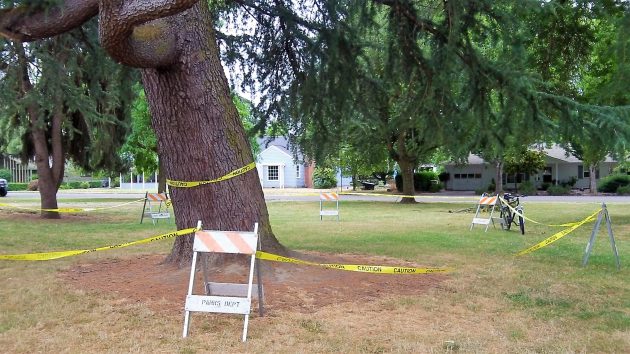 This may keep people out, but does it keep wasps or bees in?

At first glance, seeing yellow caution tape in Albany’s Takena Park made you think that a venerable giant of a tree had been declared a hazard and was about to be cut down. Not so, however. It was a problem of a lesser sort.

I noticed the tape late last week, and by the time I got around to asking anyone about it, it was the weekend. I emailed Ed Hodney, parks and recreation director. Weekend or not, he replied on Sunday and explained: “We’ve had a problem with wasp/bees nests in Takena. We’ve removed some; another popped up. We flagged the tree until our pest contractor could get there.”

The contractor apparently had not yet got around to this particular call by Monday, because the tape was still there by mid-day. But nobody else was around to get stung, so it didn’t look all that urgent.

The good news: That towering tree, with its huge and bending limbs, is not in jeopardy. My only remaining question: What kind is it?

Here’s a thought. Parks already do a world of good. They could do one more thing: Add to our knowledge of nature by posting little signs identifying the species of significant trees. Linn County does that in the courthouse park, and it’s a big help to people who want to know what they’re looking at but didn’t grow up surrounded by woods. (hh) 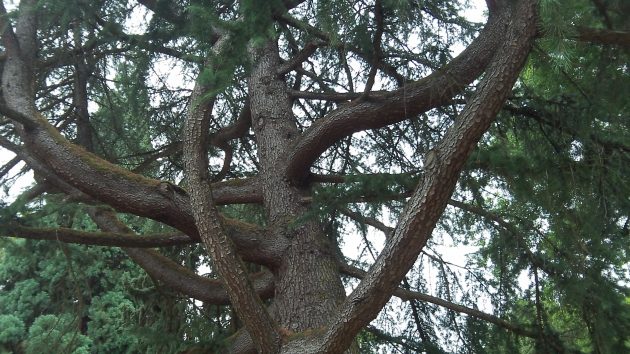 If you know what kind of evergreen this is, use the comment feature below to let me know too.