This is a … what exactly? 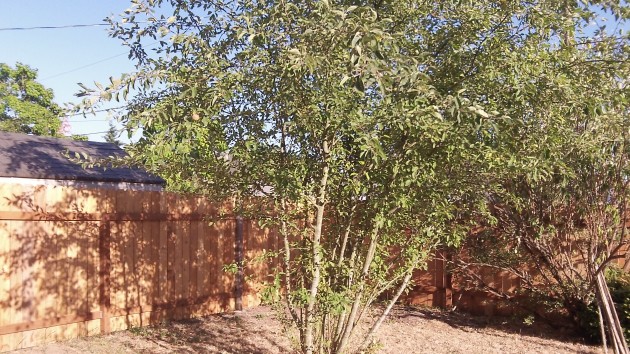 Is this just a tree with many thin trunks, or does the species have a name?

And now for something completely different, a botanical mystery. Well, at least it was a mystery to me. I may have found a possible answer. But it might be wrong, so I could use some help.

In reporting the news and writing about the real world around us, most of us call a tree a tree. That’s because we either did not take botany or paid no attention when we did, and to this day we have no clue. So a tree it has to be.

This stultifying ignorance has always weighed on me, so I was glad a few years ago when the National Arbor Foundation sent me a booklet titled  “What Tree Is That?” Later I acquired a similar pamphlet by one Tom Watts called the “Pacific Tree Finder.” I have often thumbed through both publications, and pretty much worn out the older one, and this way actually managed to identify trees that I wanted to be able to call something other than “that tree.”

So now here’s this curious little tree with many trunks. I didn’t wonder about it much until one day a few weeks ago it developed one solitary fruit. I turned to my trusted sources, which guide the reader by means of questions, mostly about the shape of the leaves: Does it have needles or leaves? If leaves, go to page such and so.

In this way, both pamphlets led me to the conclusion that what I was looking at was a crabapple. This sounded like the right answer because that single fruit does look kind of like a litte green apple. But doubts persist. Why? Because my printed advisers maintain that crabapple leaves are “jagged-toothed,” and the leaves of this one don’t look that way to me. If anybody has a different  idea from the photos alone, I’d appreciate it if you would leave me a  note. 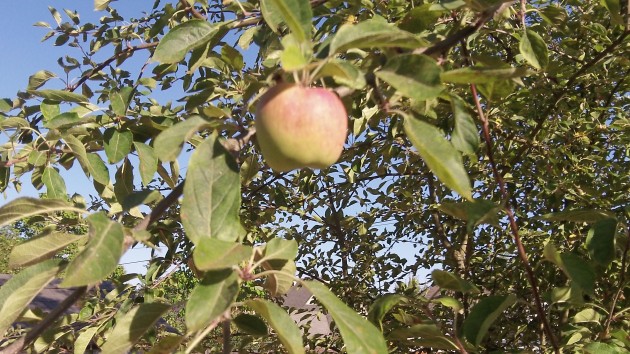 Looks like an apple, right? So it could be a …

Being able to call trees and other plants by their proper names may not be the most crucial thing we need to be able to do to survive in the 21st century. But if we said “Look at that sycamore” instead of “Look at that tree,” it would at least enrich our every-day speech. (hh)