This case should be dropped 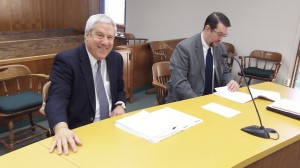 The state of Oregon has been going after Mandy Kenney for a year and a half. Next week this 29-year-old mother of three is scheduled to go on trial for reckless driving and driving under the influence. This is an unnecessary and unwarranted prosecution and a waste of everybody’s time.On Feb. 1, 2012, Kenney had taken two prescriptions, Ambien to help her sleep and an antidepressant. Then, after midnight, she drove from her home in Turner about 16 miles to a spot on Richardson Gap Road and ended up in a ditch. She told deputies she didn’t know how she got there. Her doctor said later she had suffered a rare side effect from Ambien, “sleep driving.”

After she was arrested and taken to the Linn County Jail, a police drug recognition expert quizzed her at 5:10 that morning and had her perform various tests. She answered all his questions and said she had not used any illegal drugs, but he didn’t believe her and concluded she was under the influence of Ambien and marijuana. The state crime lab in Springfield proved the expert wrong about the pot; her urine test showed only Ambien and the other medicine, Effexor.

Under a state Supreme Court ruling in another case last spring, the state must show that Kenney got behind the wheel “voluntarily.” Given what the doctor said about Ambien, the state can’t possibly show that. Instead of dragging this unfortunate woman before a jury on Oct. 29, the state should drop the case. (hh)

From Ted Salmons:  Now I’m usually a “nail them to the wall” kind of guy when it comes to impaired/drunken driving. I usually compare it to standing in the middle of a street and randomly shooting a pistol up and down the road.  It amounts to about the same thing in my mind. But….  in this case I’d have to give the woman the benefit of a doubt based on the “evidence” stated in your posting. If that’s all the state has in the way to prosecute her then it appears time to drop the case and move on to crimes they can prove. Especially those that have involved harm or damage to other people or their property.

Carolee Gascoigne, on Facebook:  I agree…a sad commentary on our justice system.

From Jim Engel:  Using your reasoning could not a similar case be made for drunk drivers involuntarily getting behind the wheel & driving? They are impaired as much by alcohol as by prescription drugs, they cannot make sound judgments, they failed to follow the warning labels on alcohol containers also. If she’d hit someone playing impaired drivers roulette would you still feel the same? What if she’d killed a mother of three?! (You do have that knack for writing thought provoking arguments.)

Yes, the case might be different if somebody had been hurt, but the principle would be the same. If you take a prescribed medicine, you can’t be held responsible for side effects that are so rare that the benefits of the drug outweigh the risk. Otherwise, who would take ANY drug whose side effects, while rare, include all kinds of dreadful events up to and including death. And even if Mandy had been aware of the potential side effect in this case, she was powerless to prevent it through any reasonable measures. She would have had to disable her car. But then, how could she use it the next day after a full night’s rest? (hh)