This bumpy ride has a point

Unless you live there, you probably avoid Albany’s Fifth Avenue east of Lyon Street because of of its rough pavement. Camera in hand, I took a ride there Friday to illustrate just how bumpy the surface is.

The Albany City Council has talked — off and on for the last year or two — about how to raise funds to fix the city’s streets and keep them in good shape. This will take a mountain of money. But the estimates so far cover only the arterial and collector streets. Residential streets like Fifth and many others are in worse shape and will take additional millions to rebuild.

As it turns out, about 17 miles of non-arterial streets that are rated in poor shape lie within the CARA urban renewal district . The district borrows money for projects, then repays the loans from property tax revenue on increased values within the district. This has been a controversial method because until the debt is paid off and the district ceases to exist, CARA takes some of the money that otherwise would go to other public services including schools, fire safety and law enforcement.

It’s in everybody’s interest for CARA to fulfill its reason for being — conquering urban blight and reviving central Albany economically — and then go out of business as quickly as possible. So as I’m rocking along Fifth on my bike, avoiding the deepest potholes as best I can, I’m wondering: Why can’t CARA employ its remaining financing authority, more than $20 million, to mount a crash program to repair the worst public streets? This would be useful especially east of Lyon, where CARA has been far less active than in the old commercial core. (Not for lack of trying, but efforts like small grants to encourage buyers to restore historic houses to single-family occupancy have largely flopped.)

In theory — my theory, anyway — having streets without holes, and sidewalks without trip hazards every few feet, might just cause a revival on the east side of central Albany. And traffic would benefit too, whether on four wheels or two. (hh) 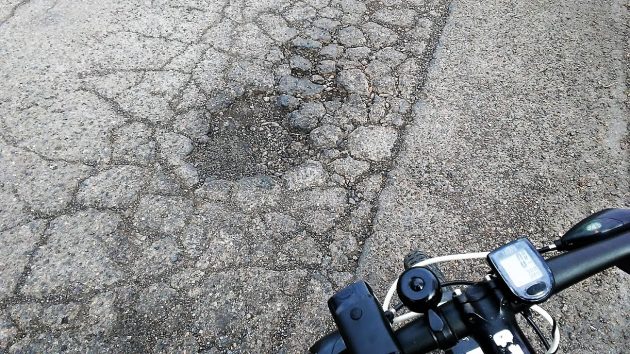 Behold one of the many potholes on Fifth Avenue S.E.


9 responses to “This bumpy ride has a point”