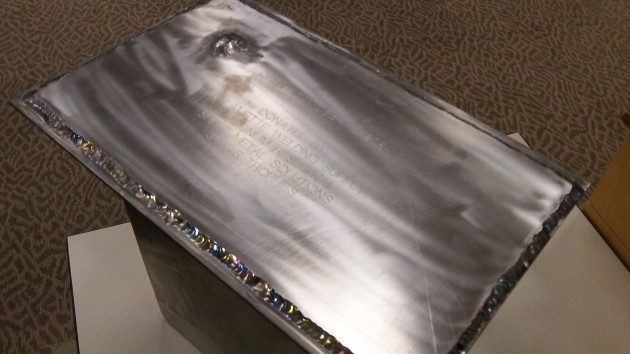 The time capsule, sitting on a table during Wednesday’s council meeting,  is made of titanium that will “last forever.”

Albany now has a new time capsule that’s supposed to remain sealed — welded shut — until October 2064. What it doesn’t yet have is a place to put it until then.

The capsule idea came out of a community birthday party organized by Albany resident Stephanie Low in October, marking 150 years since the town was incorporated as a city. Councilman Rich Kellum, who owns a welding supply business, volunteered to carry out the idea, and this week he brought the finished item to the city council.

The next day I asked him about details including his role in the project, and here’s his response: “I designed it and had it cut out by Sheet Metal Solutions Inc in Tangent, which donated the work. The body is 6 inches x 12 inches x 18 inches with a 2-inch flange,  made out of titanium grade 12, which will last forever and was donated by Zirconium Research Corporation. The engraving was done by Janos Trophies, which donated part of the work. It was put together for the 150th anniversary of Albany (and will) be opened on the 200th anniversary.”

And what’s in it? Kellum again: “It contains a bunch of stuff from kids in grade school and middle school, plus copies of the Democrat-Herald and some articles about the making of it, a welding journal, some business cards and restaurant menus, listings for houses, stuff from the chamber of commerce, some music that I wrote, and the plug that I was going to use to seal the hole. That, in retrospect, should not have been stored inside while waiting for me to seal it.”

Kellum didn’t do this by himself. “I welded it with the help of Brian Crousser, who was holding an argon purge on the back side of the flange. Titanium is not easy to weld in a regular atmosphere. It sucks up oxygen and nitrogen when it is hot.”

Where to put the thing for the next half century? Until a more fitting site can be found, the box is being kept at City Hall. If Albany goes ahead and builds a new police headquarters and downtown fire station — which willl depend largely on a bond election planned next May — perhaps the time capsule can be incorporated in one of them, preferrably in the station downtown. (hh)