They don’t hear you coming 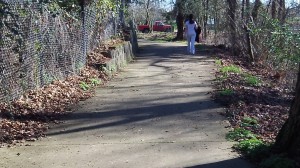 One of Albany’s multi-use paths: This pedestrian leaves plenty of space for passing traffic on wheels. Not all of them are that careful.

It’s no big deal yet. No big deal, that is, until some pedestrian out for a stroll and lost in his music is run down by a bike.

I’m talking, of course, about the dangers inherent in the use of ear buds while wandering along those so-called multi-use paths. “Multi-use” means only two things, really: On foot or on wheels. We have several paths of that kind in Albany. Besides the Dave Clark Path along the Willamette River, there are the Periwinkle and Cox Creek paths, along with the unpaved routes through Simpson and Takena parks as well as the winding trail along Oak Creek that skirts the subdivisions at the end of 53rd Avenue. Mostly, though, the issue I’m talking about arises on the paved paths.

Say you’re on your bike and sailing along at a stately 12 mph, going slow and keeping in mind that “multi-use” implies there could be walkers around the next bend. Or dog walkers with their pets at the end of retractable leashes stretched across the entire path. If they face you, you hope they can see you coming. But if they walk the same direction you’re going, you slow down and say something like “On your left” if you mean to pass them on the left. But they can’t hear you. They are plugged into music. Or maybe they are absorbed in an audio book.

In either case, they are lost to the harsh reality of the here and now on the multi-use path. They don’t hear you coming and they don’t hear your warning. You slow way down before you pass, but to the walker it may still come as a shock. All you can do is hope they won’t be so startled they jump sideways. As far as I know, there have been no collisions like this yet. But it’s only a matter of time. (hh)

From Rolland Brower: I have to disagree with the comment that people who wear ear buds create (problems) with the bike riders on these paths.  My wife and I walk the Dave Clark path on a regular basis.  Neither of us wear ear buds as we don’t need music to block out the world when we enjoy being outdoors.  Quite often we have a bike rider come up on us and neither ring a bell, make noise, or even have the courtesy of saying “on your left.”  I understand the bells would cost some money, but being courteous is still free.

From Warren Beeson: Good points, Hasso. Perhaps we need to alert our legislators so they can pass a few more bills regulating where we can walk, use of ear buds while walking, audio signals required for bikes, etc.  A few more laws should solve this problem just as it has with so many others.  Ouch, I just bit my tongue that was planted firmly in my cheek.