These gulls waited in vain 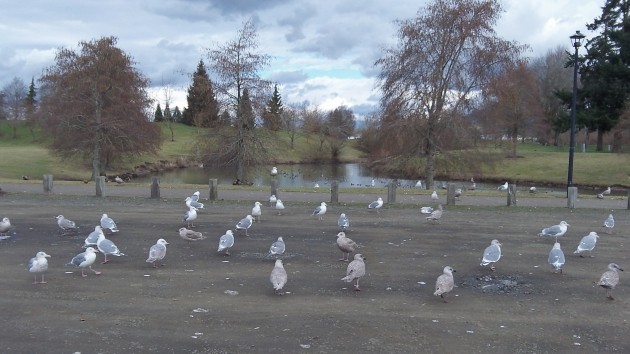 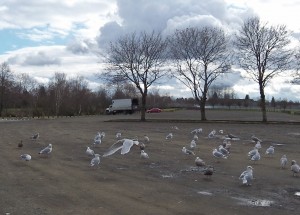 One decides to go airborne and head for the lake.

I didn’t have to ask what these gulls were doing in the parking lot at Albany’s Timber-Linn Park on this February day. They were waiting for somebody to come around to feed the ducks in the lake, and they meant to be there to claim their share.
I’m no bird expert, but these winter visitors looked like glaucous or western gulls, or maybe a mix of both. As you can see, they turned away when I got close and they could see I had only a little camera in my hand and no food at all. Judging by the flecks on the ground, this flock had been around a little while.

We often call these graceful flyers seagulls, but that’s a misnomer because they are common even far from the coast.

According to what I’ve read, there’s disagreement on the effect of feeding gulls old bread. Some say it does them no harm, while others warn that bread expands in the gulls’ stomach and causes them much discomfort. We saw no sign of that when I was in the seventh or eighth grade. My classmates and I would spend wintertime recesses between periods by opening the classroom windows and launching bits of our sandwiches out into the sky from the third floor, out toward the scores of gulls hovering there. Most of the time, the birds snagged those projectiles of bread and salami before they hit the ground in the schoolyard below. (hh)


One response to “These gulls waited in vain”