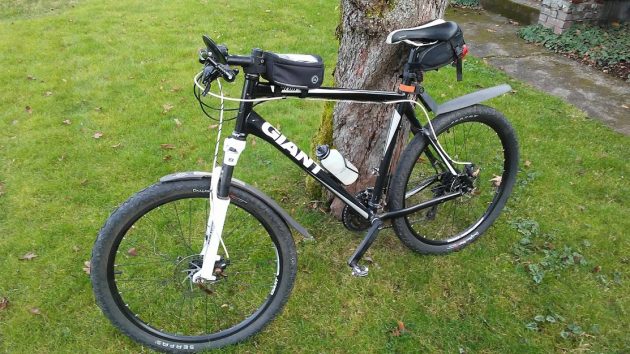 Elegant or fast? Neither, but it gets me around town at far less cost than my truck.

On Facebook the other day, somebody complained that my bike shows up in many of the photos on hh-today. “Unprofessional,” I believe was the word used. To which I say: Tough.

Somebody else, also on Facebook, called it a “low-end bike.” That’s not far from the truth, though why anyone would feel it necessary to point it out is beyond me.

As it happens, this old mountain bike has served me very well. I bought it in 2011, at Bike N Hike in Albany, for around $500 if memory serves. That’s an entry-level price for a decent bike, sure enough. But I’m not competing with anybody and I’m not going for speed.

Instead, I found that for tooling around town and getting a little exercise at the same time, this sort of vehicle is just about perfect. A road bike, lighter and more expensive, would be faster, but for the rough condition of some of Albany’s older streets, not to mention the occasional jaunt on unpaved terrain, I prefer the fat tires and sturdy frame of this one. (That’s pretty much why my road bike spends most of its life these days hanging in the garage.)

I’m not the kind of bike fanatic who is down on cars. But I like the option of traveling under my own power when the distance to be covered is not too great and the weather not too wet.

When the bike shows up in photos that go with stories on this site, it’s to illustrate that cycling is a viable transportation alternative for getting around Albany and environs. Most of our streets are perfectly fine for bike travel, and I’ve found motorists almost without exception to be courteous. (Once I thought that the blaring of a car horn was to admonish me for running a stop sign, but then it turned out she was just trying to say hi.)

The bike I ride most of the time is a model called Rincon, made by Giant. This model is no longer made. The odometer on the handlebar computer went out after some 12,000 miles. The mileage reading on the replacement is getting close to 3,000. And the bike itself, with minimal maintenance except for a new chain and cassette, is still working just fine.

So with any kind of luck, you’ll keep seeing it in many of the photos on this site. And if you don’t want to see it, look somewhere else. (hh)