There used to be a bridge here

As you can see — if you can see above the construction noise on the video — hardly a trace remains of the North Albany Road bridge across Thornton Lakes, and it looks as though the contractor has begun driving pilings for its replacement, which will sit two or three feet higher.

I was away over the weekend, when the old bridge was removed as part of the North Albany Road reconstruction project from the railroad tracks to Quarry Road. So on Tuesday I walked in to take a look. That green mess down there is the channel between East and West Thornton Lakes. (There used to be a “turtle crossing” sign on the road right about there. Wonder what the turtles think of all this.) 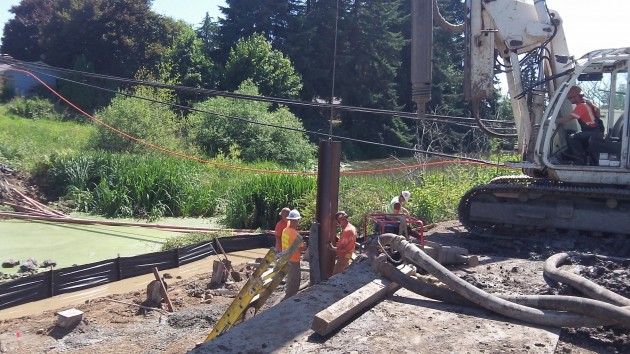 No sign of turtles. I trust they are waiting out of harm’s way.

The road is closed to through traffic, obviously, but residents in the construction zone can get in and out. The city of Albany hopes to reopen the road no later than the Friday before Labor Day.

Scores of workers and dozens of pieces of heavy machinery have been deployed all along the massive project. Judging by all the activity in this early going, if they don’t make it by the target date it won’t be for a lack of trying.

Emery & Sons Construction of Salem has the $6,559,593 contract, which includes the bridge and a new water main along with the work on 3,000 feet of road.

With this project and the simultaneous construction of a separated walking path all along Gibson Hill Road, getting in and out of the back portions of North Albany on the main thoroughfares is a combination of detours and being stopped by flaggers. Savvy commuters have found other routes, all longer but unobstructed. (hh)