Thefts in Adair: Better lock up 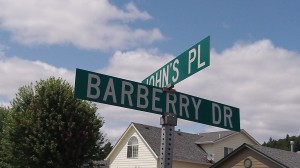 Thefts were reported on both these streets and others.

If they aren’t already doing so, people living in Adair Village will want to start locking their doors, especially their car doors. On Aug. 1 the Benton County sheriff got reports of what, in terms of the quiet little village of about 900 residents west of Albany in northern Benton County, amounted to a veritable crime wave.

Before dawn that morning somebody on Barberry Drive called the sheriff and reported the theft of two scoped rifles and numerous other items out of an unlocked vehicle in an open garage. The second report came shortly after 8 from John’s Place, where a thief also entered an unlocked vehicle and made off with stuff worth more than $2,000, including golf clubs and a pair of Oakley sunglasses.

Forty minutes later, deputies logged a complaint from Hyacinth Court. The loot this time, lifted from two unlocked vehicles in the driveway, was two iPod Nanos. Finally, just after 7 that night, a resident on Columbia Avenue reported the theft, also from an unlocked vehicle, of another pair of Oakleys plus a cell phone.

A couple of years ago, Adair formed its own police force, but it didn’t work out. And for now the small city has dropped the idea of having its own patrols, even though it might reconsider if development takes off. These latest reports are a timely reminder that even in friendly small towns, it’s best not to leave valuable stuff such as rifles and cell phones lying around without locking the doors. (hh)