The wye? The answer! 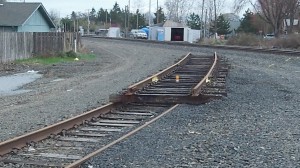 No trains here: What the wye has looked like lately.

How about a special passenger train carrying Portland-area fans to a Civil War football game in Corvallis? It’s just an idea, and here’s how it came up.

On April 21, I posted a video wondering whether the Albany wye would be forever lost. That’s the Y-shaped rail junction on the Union Pacific mainline near Sixth Avenue that allows trains to turn around. The northern leg of this wye has been broken up while the railroad works on its long-delayed project to build a new track — known as the Santiam Lead — to the Millersburg yard.

State rail planner Bob Melbo says yes, direct access to the northern leg has been lost. But access to it from the mainline will be preserved via a crossover to the Santiam Lead. The worst loss, Melbo says, is that a southbound train can no longer make a simple right turn in Albany to go to Corvallis. “This could come into play,” he emailed, “if we ever were to run a Civil War football special from Portland to Corvallis, which periodically is suggested by train proponents.”

It could still be done, he points out, but the train would have to stop, back up on the crossover toward Millersburg, then make the turn to cross the river. The same back-and-forth movement would have to be done on the return trip. It doesn’t sound like too much of a problem. But first the Santiam Lead has to be finished and that leg of the wye restored. We can think about football when that’s done. (hh)

Rhea Graham responded on May 8, via Facebook: It could certainly reduce the number of DUIIs, accidents, injuries, and slowdowns on game days if “they” would make it work.