The Willamette: Why a ‘minus’?

On a bike ride Wednesday to celebrate the temporary absence of rain, I stopped at Albany’s Bowman Park to take a quick look at the Willamette River. It reminded me that a few days ago, the river got a B-minus on some report card. Why not an A or at least a plain B?

After all, at the expense of hundreds of millions of dollars over the last 40 years or so, since the McCall administration, the river has been cleaned and restored far more than anyone could have hoped when the work began. The most recent table available from the Department of Environmental Quality says the water quality index of the river is good at Albany and excellent at Harrisburg, Corvallis and Salem. So why a “minus”?

The new report card came out about a week ago. It was the result of an assessment of the river’s overall health by 20 scientists and other experts, a project supported by the Meyer Memorial Trust. These people looked at more than a dozen indicators or factors in addition to just the quality of the water itself. And while they applied the B-minus to the entire river, they separately rated the upper and middle sections a plain B, and they gave the lower Willamette, from Newberg to the Columbia, a C-plus.

The middle section runs from Albany to Newberg, and the report card finds that segment “very good” on four items: survival of juvenile chinook salmon and the low levels of toxics, fecal bacteria and harmful algae blooms. The middle river is merely good or B-quality, the report card says, in terms of water quality, non-native fish, habitat for bald eagles, channel capacity and a few other characteristics. And the segment is considered not so good for native fish, forests along the stream, and “flow targets.”

Then we get to what the report writers think is bad in the middle river: the temperature is too high late in the year, and there are state advisories against eating too many river fish. Years ago, at a hearing, I remember seeing a DEQ chart that showed that the temperature in the river has always been higher than what the modern standard calls for to keep fish happy. Driven by DEQ regulations, cities up and down the river have been making expensive efforts to cool their discharges, but I have not heard that this is doing any good. And as for the warnings about eating too many fish, they are based on the presence of mercury. The last I heard, much of that was said to come from mineral deposits near the headwaters, and the rest from the atmosphere, wafted to Oregon in the airflow around the globe.

So it looks to me that the minus grade comes about at least partly from two factors — temperature and mercury — over which we have little or no control. We’ll have to keep concentrating on avoiding all the other things that can damage the river. And so far at least, it seems to me we have done a very good job on that, better than what that chintzy “minus” implies. (hh) 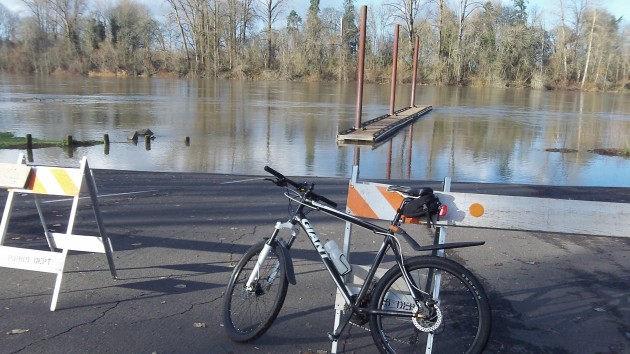