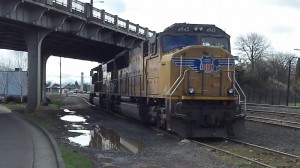 Two UP locomotives parked in their usual spot one afternoon this month: No noise and no exhaust.

Don’t think that the Union Pacific, a huge railroad operating in 23 states, ignores local issues. It doesn’t. Here’s an example.

Earlier this winter I heard from a reader that her mother, who lives near Albany’s Swanson Park and takes walks around there, was concerned about the noise and exhaust of UP diesel-electric locomotives that are often parked nearby, under the Pacific Boulevard overpass. She said the engines seemed to be idling for hours at a time. She wondered what the neighbors could do about that.

I sent an email to Brock Nelson in Portland, UP’s public affairs representative in Oregon. The next day, I had this message from Aaron M. Hunt in Sacaramento: “Your email to Brock Nelson was forwarded to me as I am the media contact for Union Pacific. Union Pacific operates in collaboration with the PNW (Portland & Western) shortline railroad in Albany. We work with the shortline to stage Union Pacific locomotives according to the operational needs of both railroads at any given time. Our operations in the area are driven by the economy and our customers’ needs. We have had numerous conversations with local residents about idling locomotives in this area and our efforts to conserve fuel and reduce emissions. We will continue meeting with residents about this issue. More than 70 percent of our locomotive fleet is equipped with automatic shut-down technology that turns off the engine of the locomotive if it has idled for more than fifteen minutes, except when temperatures drop below 32 degrees, in which case the engines are allowed to idle to protect the  equipment from the cold.”

I often pass the spot where the locomotives are usually parked, and a week or so after getting Hunt’s message, I stopped there to take a closer look. Two engines were sitting there, as expected, waiting to be called into action. I hung around a while and watched and listened. Not a sound, except from the traffic on the overpass above, and no exhaust. The engines were shut down, just as Hunt said they would be when it wasn’t freezing cold. (hh)