The trouble with people: the mess they leave 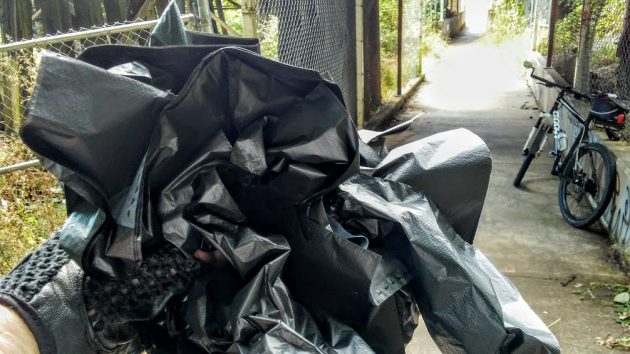 That bundle of crumpled black plastic you see in my left fist is a dozen or more dog waste bags the Albany Parks Department was kind enough to supply and somebody then threw away or carelessly dropped on the Cox Creek Path.

Whoever it was left them there, to be scattered by the wind all over the path near where it ducks under the Union Pacific main line. That’s where I found them on Wednesday afternoon.

Going by on the bike, I first mistook all those black sheets in the bushes as carbon paper. Who still uses and then litters with carbon paper, or even knows what it is? That was my first fleeting thought.

Then I thought that somebody should pick these up. Nobody else was around to volunteer.

As soon the first one was in hand, it was obvious what they were. I’m guessing here, but somebody evidently picked up a bunch from one of the dispensers the city maintains around the various parks were people walk their dogs. And then, somehow, left them all — with nothing in them, I was glad to find out — on that bike and walking path along Cox Creek.

I grabbed as many as I saw lying around on the path and in the bushes, got back on the bike and took them to the nearest trash can, which happens to sit at the edge of the parking lot at Simpson Park.

Those plastic bags were not the only trash under the tracks that day. Often the place is a dump.

It makes you wonder about people sometimes. Our city crews try their damnedest to keep the parks and pathways in good shape, and then along come people whose first instinct is to leave their mess behind. (hh)


9 responses to “The trouble with people: the mess they leave”