The threat of surveillance: Does it work? 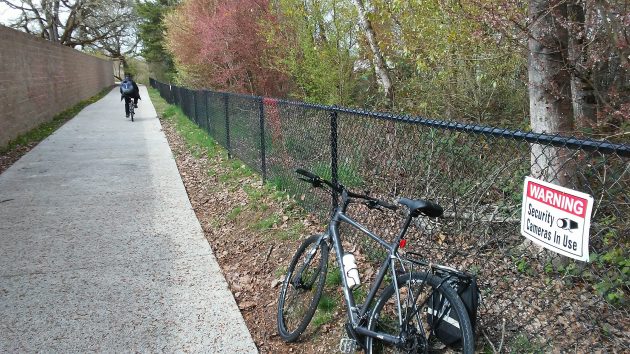 The Periwinkle Creek Path behind Lowe’s in Albany on April 3: No trash or spray paint.

When I saw those warnings posted on the Periwinkle Creek Path earlier this month, no trash or graffiti were in sight, making it look as though the threat of being surveilled had stayed the vandals’ hand. Another look today showed that, alas, the defilers of public spaces are not so easily deterred.

The parks department posted the warnings because this newest section of the path, extended to Ninth Avenue when Lowe’s was built in 2015, was having problems with vagrancy, vandalism, and so forth. The signs had been posted every 100 feet or so on the fence between the path and the creek.

Today, on April 20, most of the signs had been stolen or otherwise removed. There was trash on the ground, though not as much as I’ve seen there before. Messages in red spray paint, including the N-word, defaced the wall on the path’s west side.

So you may wonder: Does camera surveillance ever work to prevent crime, including vandalism? The debate is still open, as you can see if you ask that question online. But chances are security cameras are less effective when the consequences of being caught take a long time to be brought to bear.

As I reported in December, a surveillance camera near the entrance to Simpson Park showed someone dumping a couch there, a giant chunk of trash that city officials said cost them $50 to have removed. The dumping happened on Sept. 29. In December the police said the investigation was still open. This month, in April, I learned that a 39-year-old man, whose last known address was in Albany, had been charged with this case of littering, and he has a court date of May 14. Why so slow? Apparently there was a “failure to appear.”

In some places — for instance London, as I understand it, and presumably Beijing — the authorities keep a watchful eye on what their surveillance cameras see in real time. We wouldn’t want that in America, especially small towns, even if we could afford it. So if we want vandals and trash-spreading vagrants to quit messing up our towns, we’ll have to think of something else. (hh) 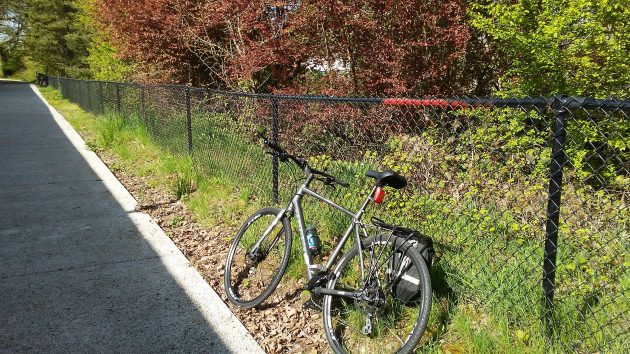 Today the signs were gone, presumably swiped by those messing up the path.

One of the spray-painted legends someone had left on the path.


5 responses to “The threat of surveillance: Does it work?”