The tax on this house is WHAT? 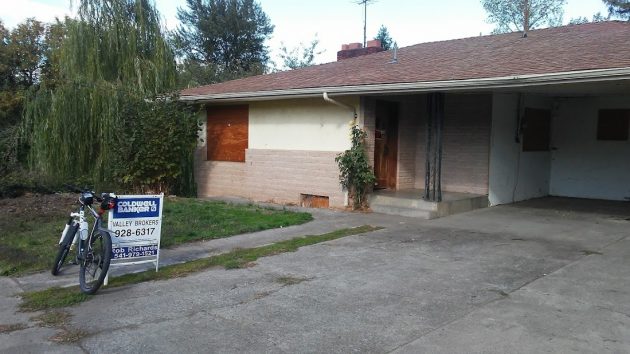 This house overlooking Bowman Park and the Willamette River was last in the news in 2016 after the city of Albany accepted title of the property, which had been used as a squatters’ hangout. Now it also illustrates that our property tax system is out of whack.

The property at 405 Denver St. N.E. had been trashed inside and out. The city of Albany acquired it in March 2016, had it cleaned of several truckloads of debris, and boarded it up. Now, as I noticed on a bike ride the other day, it’s been listed for sale for $159,900, which seems like a pretty good deal for a place with six bedrooms on two floors.

The Linn County assessor as of this week claims the lot and house together have a real market value of $269,620. The tax this fall, on the assessed value of $262,470, is $5,298.93. For the last few years, the place had been in a bank foreclosure, and someone, presumably the bank, dutifully paid the taxes every year on an assessed value far higher than what the property was worth.

I’m not sure who if anyone is going to pay the tax now that the city holds the title. Maybe the bank will continue to pay it to preserve its mortgage rights. But think of it — a combined property tax bill of nearly $5,300 on a place that can’t be lived in without extensive remodeling and repairs.

This year’s listed tax bill on that property, by the way, is 10.3 percent higher than last year’s. That seems to be about the normal range for tax increases on Albany properties this fall. Another place I checked, a modest little house on the west side, showed an increase of 9.4 percent. The sharp increase is the apparent result of the blanket 3 percent rise in assessed value allowed by the state constitution plus the boosts that voters approved for city, school and community college bonds.

The house on Denver Street reminds us, though, that steady and occasionally sharp annual increases are not the only problem with the property tax. The house demonstrates that what a property is worth and what the tax man claims as its value are not necessarily even close. (hh)

8 responses to “The tax on this house is WHAT?”