The switch that didn’t happen 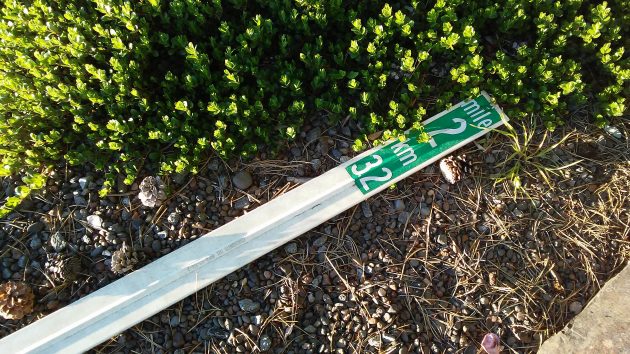 For close to 40 years, this mile/kilometer marker stood on N.W. Oak Grove Drive outside of Albany. Now this lone sentinel of a long-forgotten campaign for the metric system lies flat on the ground, just like the conversion campaign itself.

It was back in the late 1970s that I first noticed this marker, made of sturdy plastic and standing by the roadside about 2 miles from the start of Oak Gove Drive. I don’t remember the details, but I surmise that it was part of the drive during that era to accelerate our acceptance of the metric system.

Just why this spot of rural Benton County was chosen to make a point about metrics, I have no idea. But there it was, a silent reminder that somewhere decades ago, the county road department must have received a federal grant to install some kilometer markers. Recently, though, either the plastic finally gave out or a careless motorist mowed the thing down.

Actually, the metric system of weights and measures has been the official standard in the United States since the U.S. signed the “Treaty of the Meter” in 1875. But except in fields like medicine and science, the system never caught on in common usage. We kept using feet, yards and pounds — not to mention miles — despite occasional acts of Congress, including the Metric Conversion Act of 1975.

There are exceptions: If you want to work on modern bicycles, especially those made in Asia, you need wrenches sized in millimeters. And of course we buy all those 2-liter bottles of soft drinks.

Just this month, someone asked Popular Science: “Why hasn’t the U.S. adopted the metric system?” The magazine summed it up: “Today, the problem with metric is the same as it’s always been: The benefits of switching are negligible, but the costs are huge.” (hh)

9 responses to “The switch that didn’t happen”