The slow study of fast trains 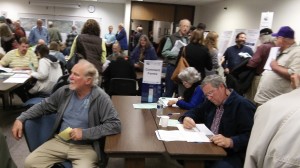 Planning for more and faster passenger rail service in the Willamette Valley, a process governed by the National Environmental Policy Act, is going much slower than hoped for when it started. It’s like turtles planning a route for hares.

Slow or not, there’s plenty of interest in the work, as Thursday’s open house in Albany showed. It was intended as a way for the public to express itself on various likely alternative routes, and a crowd showed up.
Some want the trains to go through Corvallis, but that alternative ranks as the lowest of those under consideration when costs and project goals are considered together. (The highest-ranked route follows the Union Pacific mainline through Albany and much of the rest of the way.)

A leadership council of elected officials — including Albany Mayor Sharon Konopa and state Rep. Sara Gelser of Corvallis — is supposed to recommend a smaller set of alternatives for more detailed study in December. The council was appointed in September 2011 to guide process budgeted to cost $10 million and then expected to take two years. So it should be finished.

But now, the study team does not expect to issue a final environmental impact statement until 2016. A final decision on the route, expected in mid-2016, then will launch a new round of environmental studies before construction can begin — assuming there is money.

Rough estimates years ago put the cost of a line ready for faster trains between Eugene and Portland at around $2 billion. Officials hope that if money is available, the project could be built in 20 years, and the cost no doubt will be higher then. In other words, don’t plan on a faster train ride to Portland until you are much, much older, if you’re still alive at all. (hh)

Bill Kapaun, via email:  If you look at the current schedules for AMTRAK from Eugene to Portland, 3 of the 8 routes are served by train  and 5 by bus. 1 of these train routes is by the Coast Starlight which isn’t cost feasible for commuting  or scheduling, since that route may be already reserved by “through” passengers.
IF we want to use Greyhound, we have to take the LOOP bus to Corvallis. Let them do the same if they want to take AMTRAK.
IF Corvallis “must” be served by AMTRAK, let them use an AMTRAK bus. A bus doesn’t require new tracks.


3 responses to “The slow study of fast trains”