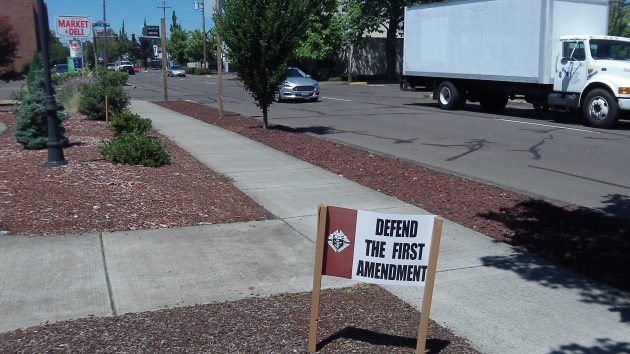 Does the First Amendment need defending, as this yard sign in front of the offices of St. Mary’s Parish in Albany urges us to do? Yes, it does, because the bedrock freedoms it guarantees are under constant and increasing attack.

I noticed several signs like this for the first time Wednesday, though they may have been around for a while. What’s the story, I wondered. The lady in the parish office referred me to Ron Hendricks, head of the Albany Council of the Knights of Columbus. It is that national Catholic organization that’s behind the campaign.

The group’s main interest, naturally, is the protection of religious liberty. A resolution passed at the Knights’ national convention in Philadelphia in August 2015 makes the telling point that religious freedom is not a benefit granted by a tolerant government, to be removed when tolerance ebbs, “but rather it is an inalienable right, rooted in the transcendent dignity of every human being.”

Moreover, it is not merely the right to have religious thoughts or the right to private worship. Instead, as Pope Francis has put it, it is “the right to live according to ethical principles, both privately and publicly, consequent to the truth one has found.”

The right to act publicly according to one’s religious convictions is often under attack in Oregon and elsewhere. Just think of the $130,000 fine Labor Commissioner Brad Avakian imposed on the Gresham couple that declined, on religious grounds, to participate in a same-sex wedding by making a special cake. Or remember the federal government’s attempt to force Catholic organizations to support abortions through the Affordable Care Act,

The First Amendment is about more than religious liberty. It’s also about freedom from compulsory or state-imposed religion, a concept that has been stretched in recent decades to ridiculous extremes, as though merely being exposed to a religious thought in a public event amounts to some kind of state religion.

And let’s not forget the other freedoms in that all-important amendment. Free speech. Freedom of the press, and of assembly, and the right to petition for redress of our grievances. All these are fundamental. And all are in more or less constant jeopardy from officious officials high and low. So, defend the First Amendment? Yes indeed! (hh)


13 responses to “The sign is little, the message big”