It was a cowardly crime (2nd update) 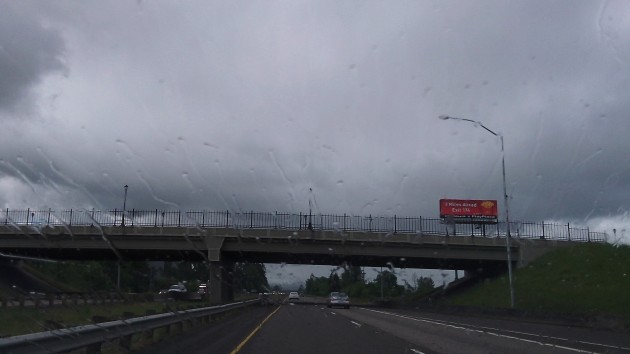 No one’s up there, so the coast is clear…

Through a rain-spotted windshield, you and I are looking at the East Oregon or Cloverdale Road overpass on Interstate 5 in Creswell, south of Eugene. From there, before dawn on April 13, someone dropped a chunk of masonry, a cinderblock, which smashed into a vehicle below and injured a woman sitting in the passenger seat. If they catch the person responsible for this fiendish attack, no punishment would be too severe.

(A few days after this appeared in 2014, the Creswell Chronicle carried a note saying the state police had corrected their earlier report, that the incident happened not at this overpass but at the one on Market Road, which is nearby and is lined by a plain chain-link fence. I just became aware of this change when news appeared, in April 2016, of a lawsuit filed by the family in the car that was hit by the cinderblock.)

It was after a similar incident on I-5 north of Albany in the 1980s that the Oregon highway department started putting up tall fencing on overpasses. In that case, someone tossed a rock off the Talbot Road bridge. It slammed through the windshield of a pickup and into the face of a young girl, Jessica Allen, riding in the passenger seat. Her dad was driving. He raced to Albany General Hospital, where she underwent the first of several surgeries to rebuild her face.

As far as anyone knows, no one was ever caught for that crime. But anyone who would willingly maim or even kill total strangers on the freeway is sure to commit plenty of other cruel crimes, and sooner or later, the law likely caught up with this one. I hope that whoever committed that outrage about 30 years ago spent many of the years since then in prison for something else he also did.

Most freeway overpass fences are utilitarian, chain-link affairs. The one at Creswell and a new one north of Roseburg are more decorative. I asked Rick Little of ODOT, and he assured me that they are just as tall as the common overpass screens. The height standards, though, are intended merely to discourage people from throwing things off the bridges, not to make it impossible.

For many years, fence or no fence, every time I passed under the Talbot Road bridge, I looked up to make sure no one was up there with a rock in his hand. Now I do the same thing in Creswell. (Pointless, I know, because these attacks usually happen in the dark of night.)

A few days after the Creswell attack, Oregon State Police said they were talking to two juvenile males in connection with the case. That’s the last I heard about it. When I asked about any progress in the investigation, the OSP spokesman said that if he found out he’d let me know. (hh)

On May 15, Lt. Gregg Hastings of the state police emailed me: “Investigation is progressing in a positive direction. No charges yet filed.”


2 responses to “It was a cowardly crime (2nd update)”