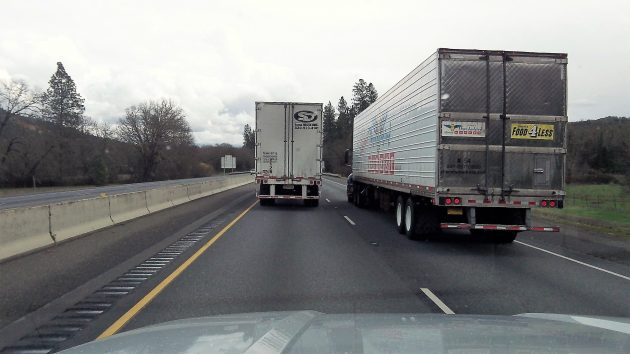 On I-5 in southern Oregon on a recent afternoon.

Without trucks we wouldn’t eat, or have many of the things we do have. I know that. Truckers are making a living. I know that too. But do they really have to pass each other all that much, holding up the rest of the traffic on I-5?

Last year the Oregon Transportation Commission raised the speed limit for trucks to 60 mph on most segments of the interstates. The goal was to allow trucks to drive at a speed a little closer to that of most other vehicles. Presumably that would eliminate at least some of the need to pass other vehicles.

But if there has been any effect, I have not noticed it. Now, just as before, trucks often pull into the left lane just as a column of faster traffic is coming up from behind. And because the trucks generally don’t go a whole lot faster than whatever they are passing, the left lane stays blocked for longer than one might wish.

Sometimes this makes other drivers mad enough to do something dangerous and stupid. A week ago, driving north toward Albany, I was in a long line of vehicles stuck in the left lane, Suddenly, far ahead, a cloud of dust. His patience evidently exhausted, somebody had veered on to the left shoulder to try to get around what was slowing everybody down.

The smart answer is obvious: Relax. Take it easy. Think of something pleasant and keep a safe distance from the guy in front.

Still, on busy two-lane freeway segments, like from Eugene to Albany on most afternoons, we could use some new rules. One is a ban on slow-moving trucks passing anyone and blocking the left lane. The other is a minimum speed limit. If you can’t go at least a steady 65, and preferably a bit faster, get off the freeway and use another road. (hh)

Heading north toward Albany earlier this month. Far ahead, the fast lane is blocked by trucks.