The risks of self-service: Really? 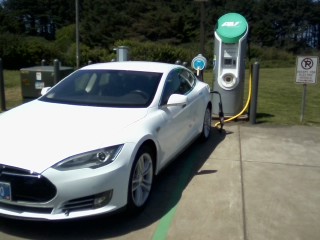 Look, a car being fueled and no attendant in sight! Oh wait. It’s a Tesla, and that hose is conducting electrical juice, not the kind made from fossilized jungles. Still, how can we allow automotive self-service when it violates all the principles the legislature set out in state law?

The law is ORS 480.315, and it outlines reasons why Oregonians must not be allowed to fill up their own cars. It cites, for starters, the need for training for safe dispensing of flammable liquids and the hazards that untrained persons would face. But compare the hazards of handling gas with the hazards of handling electricity! Surely an untrained person could be shocked senseless as a result of clumsy handling of a powerful electric charge. (Check the simple instructions on a gas pump — insert card, pick grade, lift up nozzle, begin fueling — against the many steps prescribed on the face of this fast-charge station.) 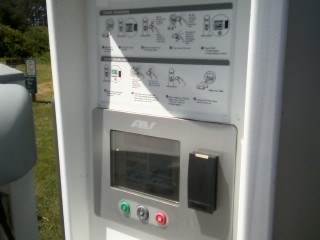 The law says we also don’t allow self-service because it would be difficult for some people such as the elderly and disabled. Well, what about elderly Tesla drivers? Who’s looking out for them? (They may be loaded; their ride retails for $69,900 and up. But how skilled are they with a plug?)

Also among Oregon’s legal reasons for banning self-service at the pump: It would lead to less repair work available at stations, and above all, fewer jobs.

None of these things played a role in the passage of House Bill 3011, which sailed through the House, twice, without a single no vote, and which cleared the Senate 25-5, with only five Democrats opposed.

That curious bill allows self-service between 6 p.m. and 6 a.m in counties that now have fewer than 40,000 residents. The bill was sold on the grounds that travelers might die if they can’t find an open station in the wilds of eastern Oregon on an icy winter night. A witness mentioned Burns Junction, where he said the lone station had closed for lack of business and self-service might enable someone to open it up again.

Well, let’s be glad a few otherwise doomed night-time travelers will be saved when they fail to carry enough gas on long drives through the Oregon outback. But does it strike anyone else that if pumping your own gas actually were dangerous, it would be even riskier on a winter night east of nowhere where the volunteer fire department or an ambulance is likely to be hours away? (hh)


7 responses to “The risks of self-service: Really?”