The risk is pretty small; however … 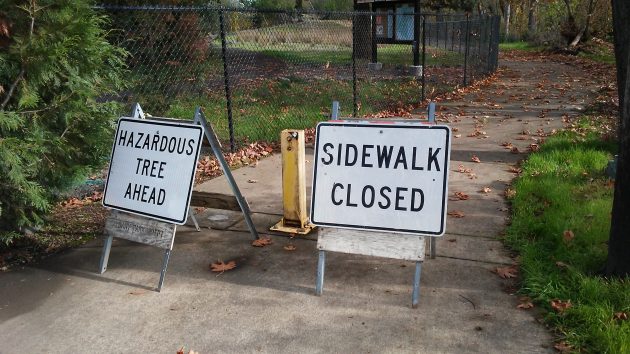 In the Age of the Lawsuit, maybe this was the inevitable result of a couple of trees on Albany’s Cox Creek coming down in a windstorm two weekends ago. On Saturday these signs had appeared at the western entrance of the Cox Creek Path.

The path was not really “closed’ in the sense that people could not use it. They could simply step around the signs here and, on the other side, near the passage under the Portland & Western and Union Pacific tracks.

If there were hazardous trees on the section of the path bracketed by the warnings, they were not easily seen. The cottonwoods and others, some of them tall and apparently dead, looked no different than before.

Two weeks ago, two cottonwoods crashed across the path and took out sections of the Talking Water Gardens fence. One of the breaks has been fixed. The path, from the Simpson Park parking lot to Salem Avenue near Waverly Park, is one of my bike routes. After I saw the wind damage the other day, I wrote that there were other tall trees there, so watch out if there’s s strong blow from the south.

It’s hard to see any hazard when the weather is fine and the air is still, as it was Saturday. But posting the path as closed until potentially hazardous trees can be cut down sounds like the kind of thing public officials have to do once they’re aware of what might happen, unlikely though it may seem. (hh)


2 responses to “The risk is pretty small; however …”