The riddle of the Baker Street rails 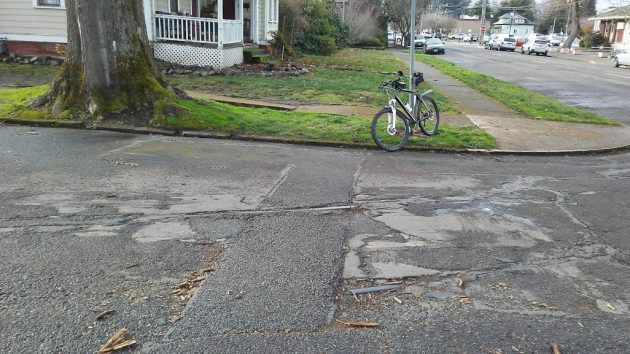 There’s a curved railroad track partly buried under the pavement at Fifth and Baker in Albany. How come?

I’ve looked for clues in various archives, but so far I haven’t been able to learn why there are remnants of a railroad track buried in Baker Street downtown.

I noticed the rails on a casual jaunt on the bike the other day. In front of the former Oregon Electric depot, now Ciddici’s, Fifth Avenue still has portions of the line. That much is well known. The track ran the length of Fifth from East Albany until rejoining the Water Avenue branch of the OE near the Calapooia River on the west side.

But why was there an apparent spur off the Fifth Avenue line running south on Baker Street? Where did it lead?

Various Albany maps going back to the 19th century show all kinds of now defunct railroad lines, but none anywhere on Baker Street, let alone on the block between Fifth and Sixth where the track is very much in evidence today. The pavement has cracked in places, letting the steel rails show.

The maps I looked at are available at the Carnegie Library downtown. Looking for more maps, I scoured the Oregon history room in the library’s basement, without luck. What about trolleys, a helpful librarian suggested.

Albany did have a trolley line. But according to everything I’ve seen, including the several references and photos in the late Bob Potts’ “Remembering When” picture books, the trolley ran north from the Southern Pacific depot, up the middle of Lyon Street. It made a turn at First Avenue and ran westward on First to the St. Charles Hotel, now the site of the Albany Carousel.

So, no trolley tracks running north and south on Baker.

Yes, back in the day, a century and a quarter ago, trains ran north and south through old Albany, but that was two and six blocks to the east, respectively, on fittingly named Railroad Street and Lafayette Street. They still run on the latter, of course.

But on Baker, no trace of railroad operations in the records. Except under the pavement, where the rails are coming up through the crumbling asphalt. Daring the idly curious, like me, to try to find why they are there.  (hh) 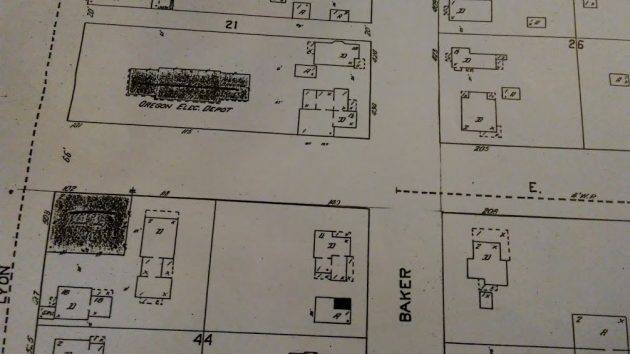 This 1926 Sanborn map at the downtown library shows no track on either Fifth or Baker, though we know the OE ran along Fifth. 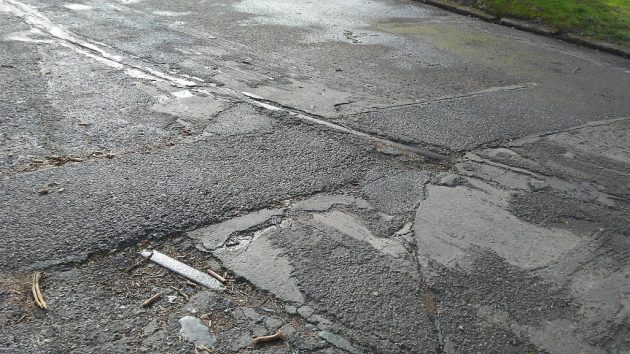 But there’s the evidence on Baker Street that a railroad once ran there.


19 responses to “The riddle of the Baker Street rails”