The rain tax: An expense for some 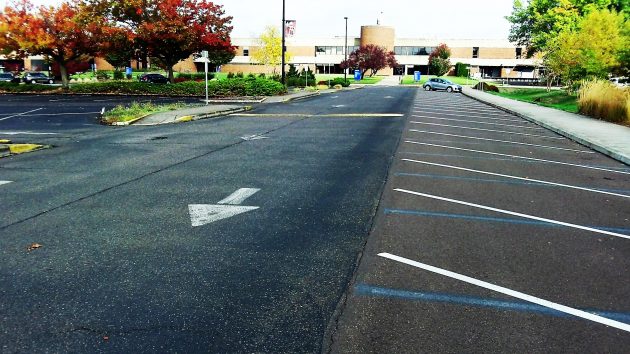 Sites with lots of roofs and pavement, like LBCC shown here, will be affected far more than residential utility customers.

Many homeowners may hardly notice Albany’s planned new storm water utility fee — a rain tax, in other words — when it takes effect next year. But for the city’s utility customers with the largest amounts of impervious surface, such as schools and companies with big buildings and parking lots, it will be a bigger expense. How much more? Read on.

The city council has been talking about a rain tax for much of this year and last. It did so again at a work session Monday. The apparent consensus is that on Oct. 26 the council will repass the storm water utility ordinance it adopted and then repealed last spring. Then, perhaps in December, it will be asked to adopt a resolution setting out the amounts to be added to the monthly bills of city water and sewer customers starting, probably, March 1.

The rain tax’s effective date is not yet firm, but it will correspond to a planned reduction of 2 percent in water and 6 percent in sewer rates. That’s because the city uses water and sewer revenue now to maintain its storm water system, amounting to about $1.3 million a year. The rain tax will take the place of that amount plus raise about half a million more to help the city deal with the anticipated requirements of a new state permit governing the management of storm water runoff.

The rain tax for each customer will include the same base charge for everyone, plus a charge based on the average size of impervious surface on residential lots and the actual size of such surfaces of all other parcels.

For the average residential customer, the city has calculated the rain tax will be $6.74 a month, and with the reductions for sewer and water service the net increase will average about $2 a month. There will be three tiers: The smallest properties pay 50 cents a month less; the largest 50 cents more, and the 80 percent in the middle the standard residential charge.

For the biggest nonresidential customers, city employees recently looked at the water and sewer bills of each for the last 12 months, then calculated the rain tax based on size of roofs and parking lots and such, and met with each to explain the effect. On Tuesday I asked for the details, and here they are:

The Target Distribution Center in south Albany would have had to pay a net $1,822 in monthly storm water fees or an annual rain tax of just under $22,000.

For ATI, with five sites within in Albany, the total additional charge would have been $620 a month or about $7,400 for the year.

For Linn County government, which has 10 sites within the city, the storm water fee would have been $855 a month or more than $10,000 for the year.

All other big nonresidential properties, including Linn-Benton Community College and Heritage Mall, would have had smaller monthly rain tax amounts ($504 a month for LBCC and $332 for the mall). And for some — the Mennonite Home, the Columbus Greens mobile home park, National Frozen Foods, Oregon Freeze Dry, and Samaritan Health — the reductions in sewer and water charges would have more than wiped out the additional rain tax for a net savings in their monthly city bills.

The council on Monday agreed that nonresidential properties should be able to earn credits of up to 25 percent of their storm water fee if they take steps — beyond what’s required anyway — to reduce the amount of runoff from their properties.

As proposed by the city staff, individual schools — but not LBCC — also could seek a negotiated credit in return for granting the city access to classes for education on storm water itself. Under the new state permit, which attempts to carry out federal law, one of the things the city must do is public education to reduce pollution reaching our streams.

Councilor Rich Kellum on Monday argued that properties that don’t put rain runoff into the city system should not have to pay. Councilman Floyd Collins, a returned public works director, countered that the expenses of the city storm water system are not affected by what a singe property owner does. On a related question, the council agreed not to exempt properties whose owners claim rain falling on their land doesn’t drain to the city drainage system at all. That would be all but impossible to administer, everybody seemed to agree. (hh)


13 responses to “The rain tax: An expense for some”