The raccoon bill; squirrels next? 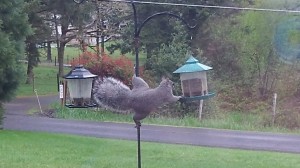 Ms. Squirrel demonstrates that raccoons aren’t the only critters that raid bird feeders.

The raccoon bill has apparently died in the legislature. This is Senate Bill 474, which would add raccoons to those wild animals — bears, cougars, coyotes and wolves — it is illegal to feed lest they become habituated to humans. The worry behind the bill is that feeding raccoons attracts them and concentrates their number, which makes it more likely they’ll spread diseases such as distemper and parvo.

The bill squeaked through the Senate on a vote of 16-14. The House Agriculture Committee scheduled a work session for May 30, the deadline, but then did not hold it.

Raccoons may not care either way. One who lives in my neighborhood has been raiding the suet cage intended for wild birds in our backyard. I wired the cage shut, but this masked raider has skillful fingers and manages to undo the wiring. Then it opens the cage and makes off with the entire hunk of suet.

I was wondering: Would putting out bird seed violate the spirit of Senate Bill 474? If so, I’m glad it didn’t pass. But maybe they will try again. And speaking of notorious bird seed thieves, what about squirrels? Are we likely to see proposed legislation on squirrels next? (hh)

Rich Kellum responded on May 31: Weld it shut… Raccoons do not carry torches. I can sell you a welder and then a Plasma Cutter. Probably only cost you $700 all together — win, win :)