The price of overhead charm 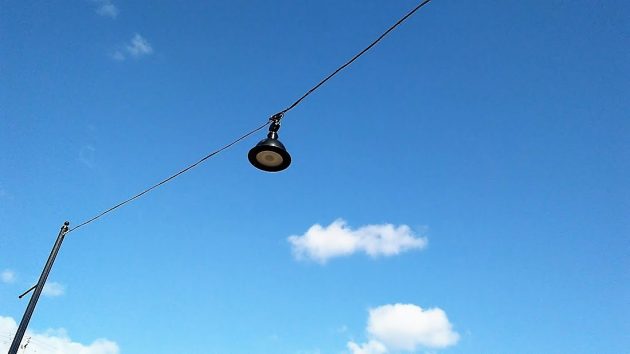 Under a clear winter sky on Feb. 19, one of the new “catenary” lights above Third Avenue.

At the risk of seeming to be preoccupied with the pot-like lights now hanging above the middle of Second and Third avenues, I got to wondering how much this wrinkle in the $8.5 million downtown Albany streetscape project had cost.

It’s not as though anybody needed any more wires cluttering the view overhead, or that with the new “acorn” lights on the sidewalks the streets would be too dark for safe driving at night. No, the consultants who included “catenary” lights in their recommendations for dressing up the streets in 2015 evidently thought this would add some kind of old-fashioned charm.

Turns out you can look up the cost in the bids for the streetscape project available on the city’s website here.

Emery & Sons, the low bidder who won the streetscape contract, put the price of these so-called “catenary” lights at $4,700 each. There are 14 of them, so the total of that item in the winning bid was $65,800.

But the lights don’t hang there on their own. They hang from wires attached to banner poles. The bid itemized the banner poles at $8,600 each. There are, naturally, 28 banner poles in the project, two for every light. This brings the bid price of the poles to $246,400.

Adding things up, then, for lights plus poles the city of Albany is paying $311,800 for that added bit of decoration of downtown streets and presumed period charm.

What period, by the way? The first overhead light I could readily find in old pictures is on Page 54 of the fourth volume of “Remembering When,” the photo collection published by the late Robert Potts. The picture shows a solitary light hanging over the center of the intersection of First and Lyon — in 1912.

In 1912 there were other overhead wires too, necessary to power the electric trolley coming down the street. Lucky they didn’t try to bring that back as well. (hh)

The new lights above the center of Second Avenue downtown.


30 responses to “The price of overhead charm”